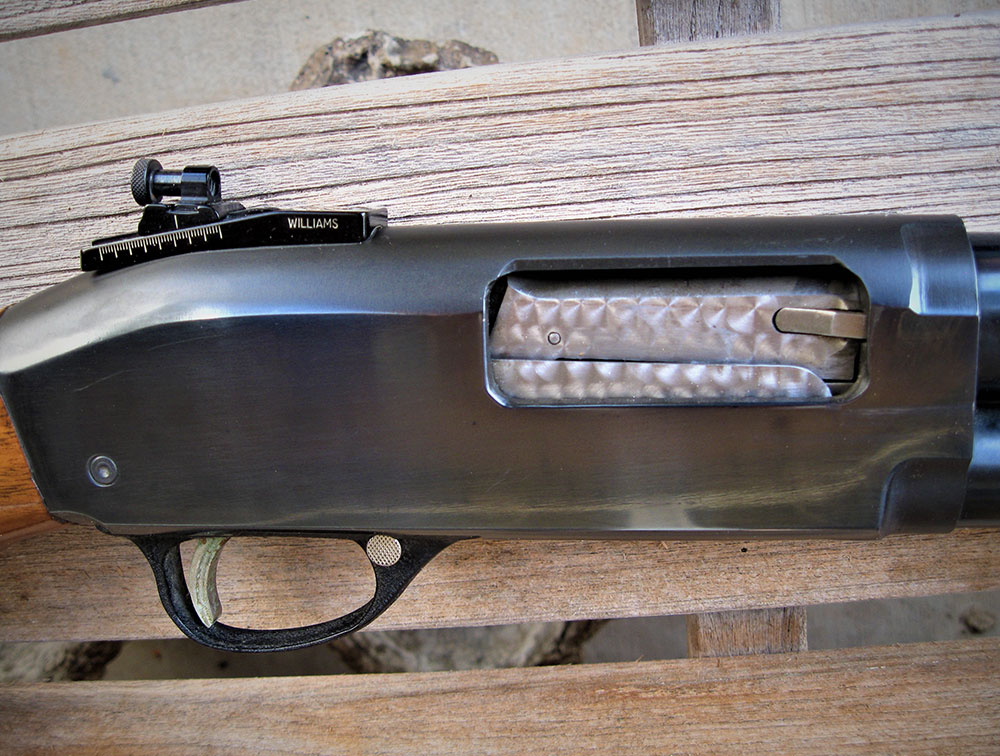 Back in 1974 I moved from Washington State to Manhattan, Kansas, to work for Kansas State University Cooperative Extension Service, with plans on taking over a family farming operation in the far western part of the state. One of my first contacts on the job was with coworker Ernie Peck, an artist with Extension. In addition, Ernie was a skilled mechanic, welder and gunsmith.

As Ernie and I worked, traveled and taught together, I learned the depth of his gunsmithing expertise. 1974 was long before legal concealed carry surfaced, but I recall his recommendation for an ideal woman’s self-defense handgun, a Ruger Standard semiauto .22 with a cut-down barrel. I’m not sure I agreed with that recommendation then or would now, but Ernie had his druthers.

He also talked at length about a lingering endeavor, to build a “butterfly magnum,” a .45ACP in a bolt action. I never saw one, but it was an intriguing concept and I once read that indeed he may have built one. Ernie and I hunted quail and cottontails north of Manhattan often during my short time at K-State. He had great spots and I had two Brittany Spaniels, a good combination for birds.

On one quail trip we were talking about shotguns and although I favored my 20-guage over and under for hunting, Ernie liked pumps and convinced me he could build me a superb quail and deer shotgun, suitable for defense if needed. I soon put a new High Standard Flite King Deluxe 12-guage 2 ¾-inch chambering with full choke, bought at a local discount store, in his shop and turned him loose.

After about a month, I paid Ernie for his labor and parts and he handed me an 18-1/4-inch cylinder bore, with swivels and a Williams front blade sight and a Williams peep-aperture rear. We went to the range, set up a paper target on cardboard, and patterned the shotgun with slugs, buckshot and No. 8s. The slugs patterned tight and buckshot looked like it would too consistently.

With such a short barrel, the No. 8s spread out quickly. I found that to be the case as I tried the pump on quail. A covey mistakenly held close for my Brittanys. Once the birds went airborne, I touched off one round and four birds hit the ground. Ernie was right, again.

I left Manhattan in 1976 to start farming and lost contact with Ernie during my many moves through the years. I discovered recently on the Internet that Ernie died in June this year at the age of 90. His obituary noted, “Ernie enlisted in the Kansas Army National Guard in 1948 and had a career spanning 35 years, having been a Warrant Officer, a commissioned officer, until finally retiring at the rank of Colonel.

“He was on the National Guard Hi Power Rifle Team for many years as a shooter and coach. His interest in gunsmithing led him to run his own custom gunsmithing shop from the 1950s through 2010. He made many custom rifles and repaired many pistols, shotguns and rifles for many sportsmen in the local community.”

Ernie’s custom build on my pump brought me into the High Standard fold. I’d had no experience with High Standard firearms (sometimes branded as Hi-Standard), but my grandfather did have a nine-shot .22 High Standard Double Nine Sentinel. I only handled the revolver once, but never fired it. When my grandfather died and his obituary ran in the local paper, robbers kicked in the back door of his unoccupied home. The Sentinel, along with other handguns of sentimental value, and the family silver, were stolen. For some reason, the thieves left the long guns, which went to me.

Some High Standard research for this article yielded a bit of information on Flite Kings, manufactured 1966-1975. High Standard was an American manufacturer of firearms, including match-grade pistols, founded in Hamden, CT, in 1926 as a supplier to firearms companies in the Connecticut Valley. Internet sources report the company closed its Hamden operation in 1985. In 1993, another firm in Houston, TX acquired the company assets and trademarks perpetuating the Hi-Standard brand name and reputation. However, in May of 2018 High Standard Manufacturing closed its doors.

Sears and J.C. Higgins also sold the Flite King, and from what my research shows, the shotgun was reliable, but mainly in 12 gauge, not smaller chamberings.  Best guess at a current value, in near-new condition, runs $150-$250. Because my friend Ernie Peck customized the pump, it stays with me regardless of price or any offers.

High Standard marketed the Flite King in a variety of barrel length and chokes, including “riot” guns with barrels of 18 1/8” or 20”. On the Internet, I did find a Flite King K-100 owner’s manual and parts list by CLICKING HERE, showing configurations and available barrels.

On the Numrich Gun Parts Corp. site, it appears that parts are available. There also are schematics and a nice history of High Standard on the Numrich site.

I’ve used the Flite King little, so its pristine condition remains. I’ve had it on standby for years with a round of # 4 buckshot in the chamber, and in the magazine three more #4s followed by two one-ounce slugs.

I guess I never had much need for a “riot” gun, but in today’s uncertain political climate there just might be. With Democrats likely leading us for the next four years, along with their promises to gut the Second Amendment and firearms ownership, and with U.S. Senate control in limbo, I indeed am worried about America’s future and freedoms. It will be interesting to see if as Joe Biden predicts, he will “unify” America, if our Constitutional rights remain intact, or if “law and order” and continued police funding will prevail. I originally am from Missouri, so he, Harris and Congress will have to “Show Me.”

As a lifelong journalist, I also took great affront that the Associated Press (AP) has decided the term “riot” no longer is to be used in news reporting. I’ve read, “Instead, the AP wants journalists to use the term ‘unrest’ because it is a ‘vaguer, milder and a less emotional term for a condition of angry discontent and protest verging on revolt’.”

So I guess my Flite King now is a tool for dealing with “unrest,” and as we know from recent and ongoing events, such “unrest” may not be “peaceful.” “Revolt” may not either.

If I am still allowed to do so, I’ll keep my “riot or unrest gun” on hand to continue to Stay safe, be prepared, and secure personal peace. ~ Mike

Mike now calls Northwestern Arkansas home, but has lived and worked in several states. He has been an independent contractor and consultant since 2006 specializing in risk management, emergency management and training. In addition to work as a law-enforcement planner and technical writer with the Boise, Idaho, Police Department, he has experience in journalism, crop and animal agriculture, dryland farming for 20 years in western Kansas, plant and animal diseases, pandemic influenza, agroterrorism, bioterrorism, food safety and healthcare marketing.

While living in Lander, WY, Mike provided photographic coverage of the One-Shot Antelope Hunt for three years, and got to meet and accompany folks such as Chuck Yeager, Carroll Shelby, Buzz Aldrin, Dale Robertson and Gen. Norman Schwarzkopf on their hunts.

In addition, Mike is a Federal Emergency Management Agency certified instructor and has worked and taught for state and federal agencies. He has responded to seven presidentially declared disasters, including Hurricanes Irma and Maria when they struck Puerto Rico in 2017. He also has worked and taught in Africa and Southeast Asia. Check his website at www.sampsonrisk.com.