What Does EDC Mean for You? 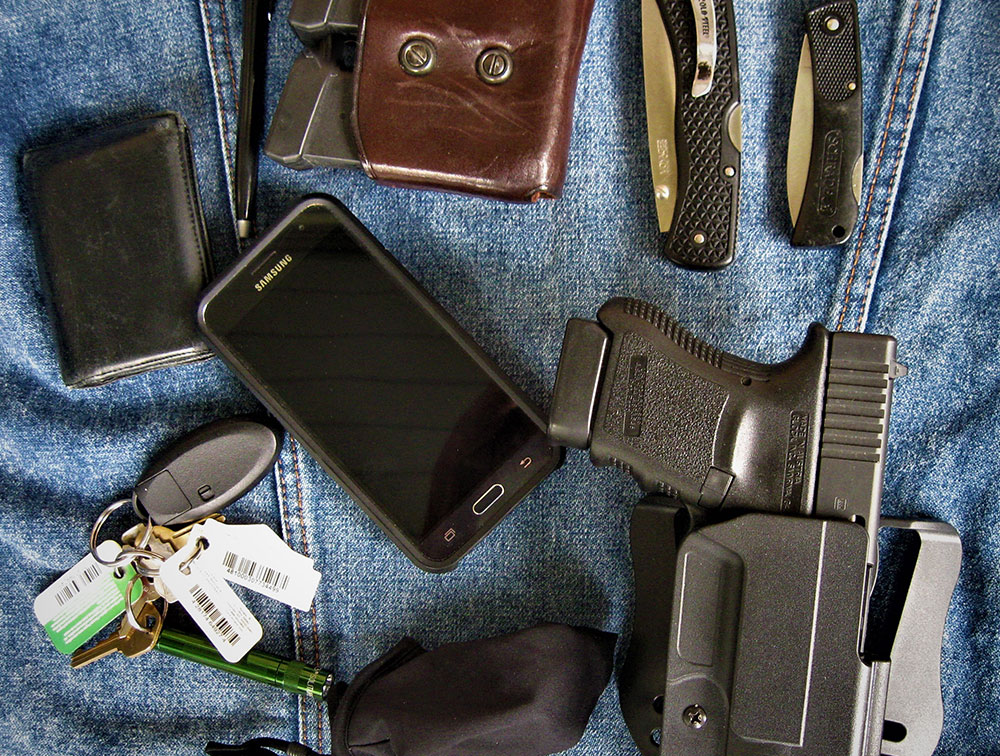 For Gun Talk readers who can recall 1952, let me take you back there when I began, unknowingly, to practice “every day carry” (EDC).

I had just turned 6 years old and Dad gave me my first folding pocket knife. He figured since he and his dad always carried a knife in a pocket, it was time for me to join the ranks. That knife of course was a Case with three blades.

My parents also insisted I carry a dime, just in case I ever needed to call, so that was my only cash, and at times, a house key. Certainly no need for identification then.

Some Internet research on the term EDC did not yield much information about how EDC first came into our current vocabulary, but EDC has been part of the human culture throughout history. Early humans no doubt carried useful items they depended on and needed, so putting a date on the beginnings of EDC is beyond the scope of my research.

Those who are fans of Gun Talk most likely equate EDC with a firearm, extra ammo and a knife, generally defined as “a cutting instrument consisting of a sharp blade fastened to a handle.” Going further, a knife is a cutting tool that serves multiple purposes, such as self-defense, rescue, opening envelopes, slicing an apple, cleaning fingernails, removing splinters and much more.
‍

‍
Add on EDC essentials such as a cell phone, keys, and your wallet with ID and credit/debit card, other “daily essentials” only you can determine, and your CCW permit if you are not fortunate enough to live in a Constitutional-carry state.

Firearms choices for EDC depend on needs, personal preferences and state laws. But if you carry a knife, be aware state laws also dictate what applies to EDC. As I am an Arkansas resident, I looked HERE for state specifics. Restrictions include blade length, types of knives and an interesting description of knife intent for “unlawful” use, plus locations that prohibit knives.

Do an Internet search for “knife laws” and your state’s name, and you will get a number of links. Another good source for both firearm and knife information is found HERE. Some state laws describe “dangerous and deadly weapons,” so a knife may qualify. Do lookUSKnife.pdf (handgunlaw.us) for city- and state-specific knife regulations.

My first Case knife and I sadly parted company years ago, but today I daily carry two folding knives, a Cold Steel Voyager with a pocket clip and a single-blade Schrade lightweight lockback in my back pocket.

One of my oldest pocket knives is a Craftsman three-blade folder that I started carrying more than 50 years ago. As with firearms, buy a quality knife for lasting use and value. Case knives continue to offer value for the cost, as do other brands. Your knife choice, like your firearm choice, is how you plan to use it and personal preference.

A good pocketknife discussion with photos is found HERE along with history showing such knives have been around since the Iron Age (a period in human history that started between 1200 B.C. and 600 B.C.)

For me, EDC determinants include the weather and how I dress, where I’m going, how I’m traveling, situational awareness and being current on state laws, including CCW reciprocity. Number of pockets also is a consideration!

When I told my wife I planned to write this article, she quickly and accurately pointed out that EDC is not just for men. And she is right. As some men may know, discovering the contents of a woman’s purse truly can be an adventure! And nowadays more women are practicing CCW, another step toward Stay safe, be prepared. ~ Mike