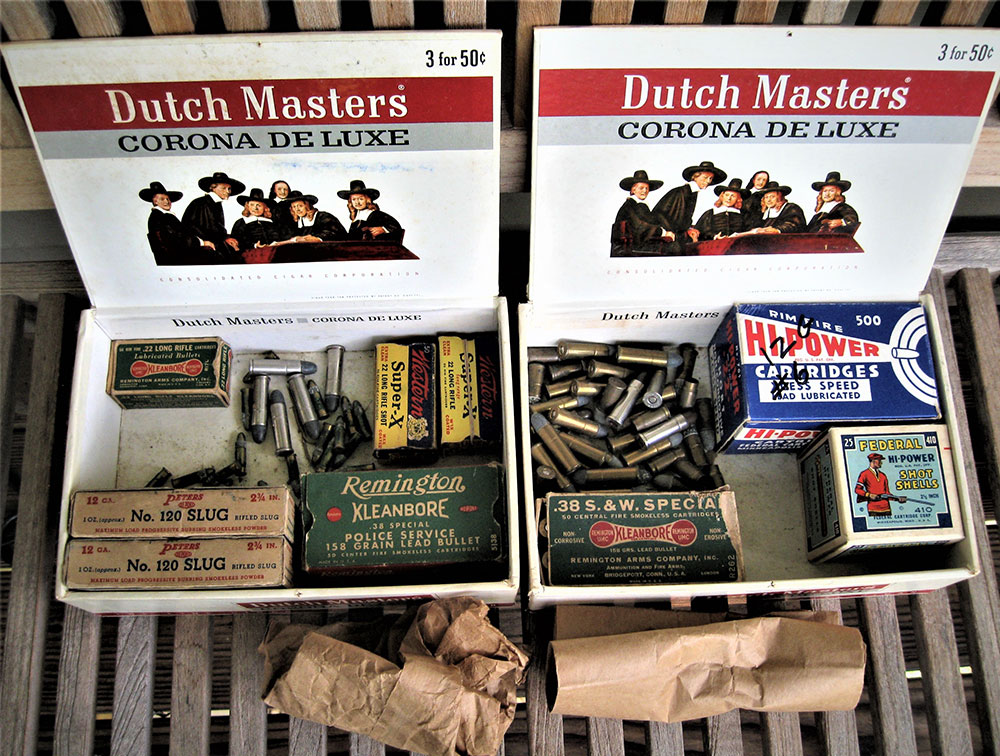 Reuniting with a high-school and college friend last month reminded me of how much I enjoy old cigar boxes and the treasures they often contain.

My friend and I did recreational shooting at the University of Missouri in the 60s, and after getting back in touch with him by phone and e-mail after too many years, we got to talking firearms. I began sharing my Gun Talk writings with him and I planned a travel stop to have dinner with him and his wife. He was well aware of my continuing interest in all things firearms.

After dinner, he told me he had a gift for me. From the trunk of his car, he produced two Dutch Masters cigar boxes. Opening the boxes I found an interesting mix of boxed ammo and lots of loose rounds. My friend told me he had gotten the cigar boxes from family and had no need for the ammo, and it was mine if I wanted.

He did say he thought the cigar boxes were more valuable than the ammo they contained, but from a research standpoint, I had to disagree. In checking at Vintage Cigar Boxes | Collectors Weekly it appears the two Dutch Masters boxes are worth only a couple of dollars each.

Having a grandfather who smoked cigars, I do know the ability and reputation of cigar boxes to contain memories and history. In one case, from a closet shelf packed with cigar boxes, my grandfather produced one containing a piece of deer leather, a piece of deer antler and pieces of flint. In the next several hours, he taught me beginning skills to knap flint and atlatl points. Yes, cigar boxes and their contents often are amazing.

I asked my friend about the ammo in the boxes, but he had little history but knew some of it was old and in his family. Back home, I dove into both cigar boxes and history began to unravel about Remington, Federal, Winchester and Peters ammo. Checking headstamps showed a real mix.

Looking at cartridge headstamps helps identify ammo. A good source for such markings is Headstamp Codes - International Ammunition Association (cartridgecollectors.org) that covers military and US cartridges.

Packaged ammo in the cigar boxes included two five-round boxes of Peters No. 120 12 gauge slugs,  several boxes of Western Super-X .22 long rifles (LR), a box of Kleanbore .22 LR that actually was a mix of Super-X and Remington .22 LR shotshells, a box of Federal Hi-Power .410 shotshells with No. 6 shot, one box labeled Remington Kleanbore .38 S&W Special and one  box labeled Kleanbore .38 Special Police Service (with a price of $2.50 handwritten on it).

There also was a 500-round box labeled Federal HiPower .22 shorts that actually contained 12-gauge shells including Peters high-base No 6 shotshells in blue paper hulls, Remington Kleanbore high-base Express green plastic No. 6 shells, one paper high-base Super-X in No 6, and one paper low-base Federal Monark No. 6.

When I opened two .38 Special Remington boxes, I found some rounds were stamped “WRA” for Winchester Repeating Arms Co. and some were stamped Rem-UMC. Someone had mixed the Remington rounds with Winchester. Wonder about the story there. If you have some old Winchester ammo you may find “WRACO” too.

“Following merger with Remington Arms in 1912, the company manufacturing complex in Bridgeport, Connecticut became a major arms supplier during World War I. The factory was Remington headquarters until 1984 and the source of sporting and police ammunition headstamped REM-UMC until 1970.”
‍

I did ask my friend about the .32 ACP and he said his aunt years ago gave him a “rusted piece of junk .32,” that he threw away as it was unsalvageable. That explained the .32 ACP ammo and perhaps its origin, but wouldn’t the rest of its story be fun to know?

I did not have much success learning about the Peters shotshells, but did find one source that reported:

“Peters Cartridge Corp. was founded in 1887 near Cincinnati, Ohio. In 1934, Remington purchased Peters. In 1944, production at Peters’ plant in Ohio stopped. The buildings are now abandoned. After 1944, Peters ammunition was made at Remington’s plant, and was identical to the Remington product, except for the cartridge cases and boxes.”

“The Peters brand shotshells, with their distinctive blue color, continued to be sold separately until the late 1960s. The continuation of the Peters brand for more than 30 years after the merger with Remington is testimony to the strength of the Peters trademark and earlier reputation.”

Another Peters’ source is Dating Cartridge Boxes By Peters Cartridge Company - International Ammunition Association (cartridgecollectors.org), but I did not see listed the two five-round rifled slug packages I found in one cigar box.

If you are fortunate enough to come across old ammo boxes, whether in cigar boxes or not, take a look at two sources for pricing information:

Even though the cigar boxes’ contents did not produce familiar memories for me, the ammo did speak of perhaps a century of firearms history and made me wonder who bought the ammo, when and why. Researching new finds always creates fun challenges and kindles further interest in firearms.

The best gift delivered by the cigar boxes and their contents, however, was an even stronger connection with a long-time and valued friend who chose to share some of his handed-down family treasures and memories.