More Nostalgia for The Holidays 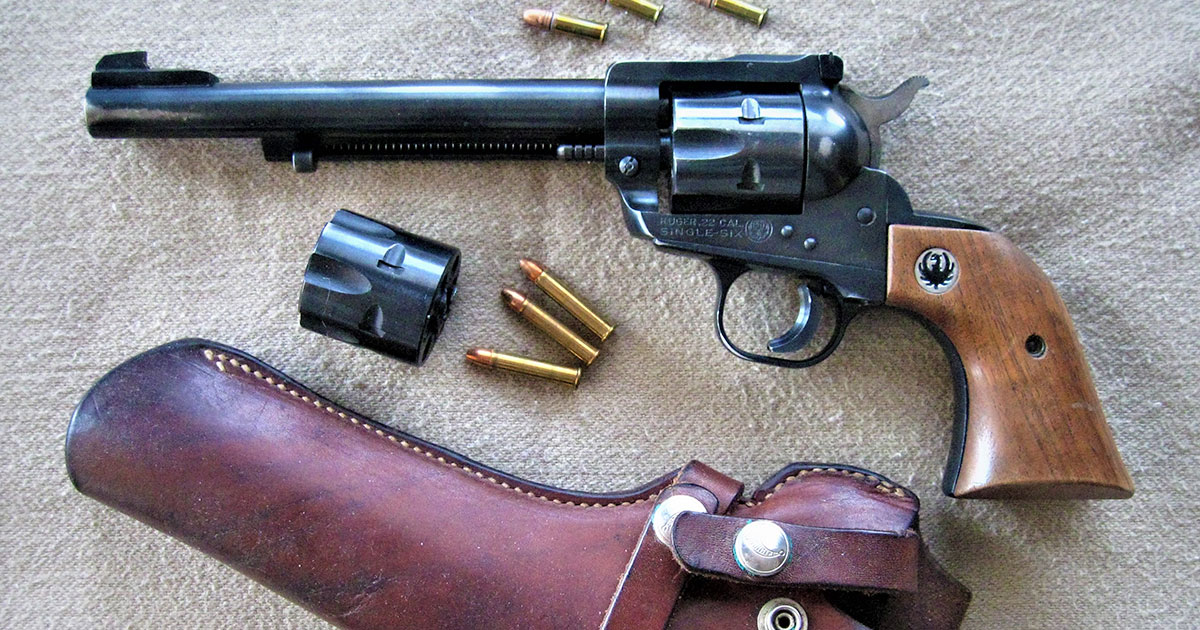 Last December, I wrote a Gun Talk article titled “Hunting Nostalgia During This Holiday Season” in which I reflected on memories of guns, dogs, hunting friends and our adventures.

With each end-of-year holidays and the hopes for a better new year, firearms always come to mind. Lately, I’ve been thinking about my first revolver, a Ruger Single Six, and when I bought it.

I worked part time in a hardware store in Columbia, MO, to help make ends meet while at the University of Missouri. This was 1966, so I was a mere 20 years old.

When another employee, an elderly Canadian from Saskatchewan, was not working the gun counter, the store owner put me there. The Canadian and I talked guns and his hunting experiences whenever we were in the store together, and he swore by the Winchester 25-20 lever action.  I’ve never handled one, but the rifle’s history is fascinating.

One of my longtime friends on campus let me try his Colt Single Action Frontier Scout in .22LR. I liked the way it fit my hand and delivered on target as well.

I had been studying Ruger .22 revolvers in the store’s catalog from Belknap Hardware, based in Louisville, KY. Ruger introduced the revolver in June 1953. I decided on the Single Six with the added .22 Mag cylinder and a 6 ½-inch barrel, blued of course with walnut stocks. Ruger began offering the magnum cylinder in 1960.

At that time in Missouri, I was not old enough to buy a handgun. I put my parents through the bureaucratic hoops with paperwork granting me their OK to make the purchase. I can’t recall what I paid, but the store owner gave me a great discount. I followed up a bit later with a Remington 700 ADL in .270 Winchester.

I had access to the store owner’s farm near Rocheport, MO, and my friend and I ran through a lot of .22 ammo in the revolvers. I also had a .22 Mossberg target rifle that was deadly on bullfrogs in the two farm ponds and my friend had a Marlin 336 in .30-30 Winchester.

With the .270, I began reloading with a simple Lee Loader as buying factory loads, even with the store discount, was not in my meager budget. Coyote hunting on the farm produced no results.

One day while I was working the gun counter, a frequent customer wanted to order a Remington 700 BDL in .264 Winchester Magnum. The owner ordered the rifle from Belknap, and when it arrived I unpacked it.

I noticed the front bottom part of the forearm had a small split and I showed it to the owner. I know I would have been reluctant to use that rifle and urged the owner to return it to Belknap.

Instead, the owner set to work with some clamps and glue, and I never discovered if the buyer knew about the problem. For me, this was a lifelong lesson in quality control, customer service and honesty.

I carried my Ruger, on canoeing and backpacking excursions for some 30 years, in a leather Hunter holster and I still have both. Bluing on the barrel and frame shows miles of holster wear. As I have small hands, I added a Flaig Ace No. 9 trigger shoe to the revolver not long after my purchase. I recently saw an Ace clone advertised for $25.

I did return the revolver to Ruger on a recall to convert it with a transfer bar for safety. Certainly prompt and quality Ruger service, and original parts came back too.

For a great rundown on the Ruger Single Six, take a look at https://gunsmagazine.com/guns/rugers-22-single-action/ that contains history and photos.

In my last December article, I wrote about long-gone, but not forgotten, dogs. In June this year, my wife and I had to put down our English Springer spaniel, Gus. He was a severely injured rescue dog about six years old when he found us in 2015. After another six years he went downhill quickly with an inherited genetic defect our vet found right after the 2021 holidays.

Early on though, I discovered with a thunderstorm, and later neighborhood gunfire, he was not a hunter, despite a bobbed tail. I never tried to put him under a gun. He was a devoted guy, wanting only to be with people and to please.

That six-year timeframe cemented a wonderful bond between him and us. He created new and lasting memories of being outdoors, sharing daily adventures and sights, and resurrected my knowledge of and respect for “dog talk.”

Gun Talk readers who have or have had dogs can understand the sadness of saying goodbye to a solid four-legged friend. Gus enjoyed Thanksgiving and Christmas, the affection and food treats, so memories of him linger this holiday season.  His Christmas stocking again will be hung alongside ours, but now in fond remembrance.

The holidays also bring memories of dogs and bird hunts in western Kansas. Thanksgiving and Christmas days there always meant a pheasant or quail hunt over my Brittany Spaniels, sometimes with friends and relatives. And even today, these holidays remind me of the distinctive smell of Hoppe’s No. 9 and ritual gun cleaning after those hunts.

Those of us who enjoy and appreciate firearms can recall good guns, not-so-good ones (I had two and traded them); guns we should have kept and let go; guns we should have bought (that lightly used Model 88 in .358 Winchester for $100); dogs; and time spent shooting, hunting and being outdoors. For me, holidays “trigger” all those memories once again.

Give thanks and celebrate the holidays as we continue to Stay safe, be prepared. ~ Mike