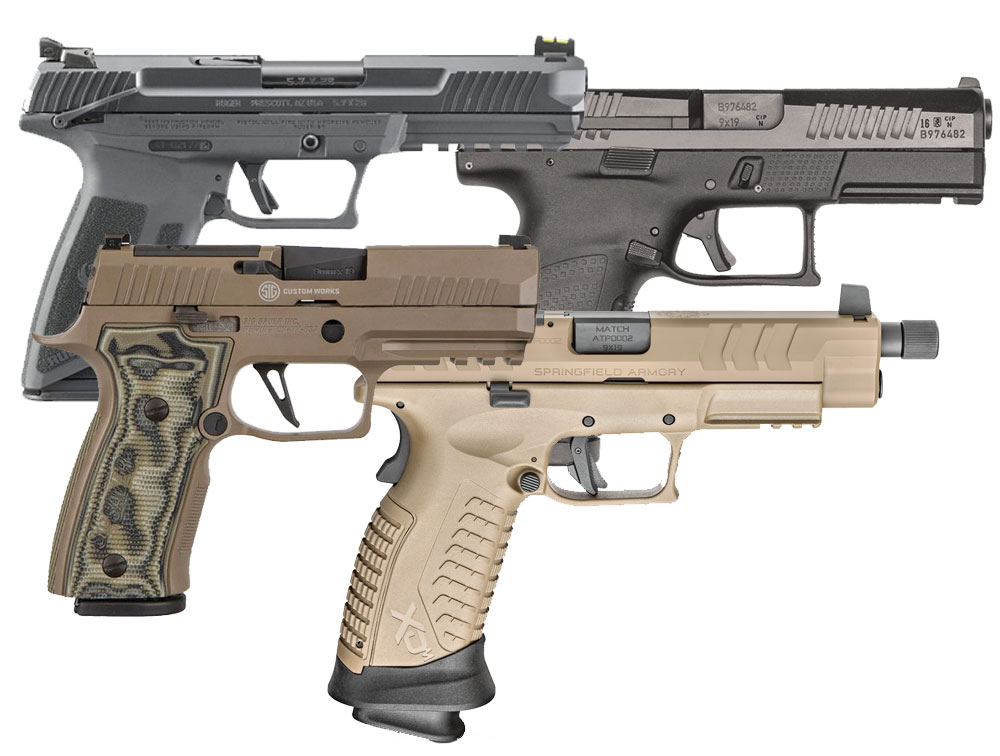 There is plenty to cheer about from a year that will not easily be forgotten. We’ve added 7 million new friends to our illustrious gun owners club. With the year ending, it’s time to look back on the guns that protect the home. Yes, all guns can protect us, or our home whenever called upon, but these pistols excel inside the home. These are the best pistols we tested throughout the year.

We’ve written about the XD-M Elite before, but it needs to be said again. The XD-M Elite pistols possess every feature needed for a great home-defense pistol. I’m a big fan of the 4.5-inch OSP Threaded barrel model for home defense.

What Springfield Armory got right was the trigger. Their new META trigger has a nice, crisp break with positive reset. This gun is big. In fact, it’s downright massive if you think about it compared to most defensive guns launched in 2020. I love a heavier home-defense gun. At 30 ounces, the XD-M ELITE OSP with threaded barrel boasts a 22-round magazine with flared magwell. The Springfield Armory team made this gun a pleasure to shoot, and it won’t let you down when you need it most.

The CZ P-10 F was a highlight of our year. The soft shooting gun was featured on our Guns & Gear show this season with high praise. I often joke about trainer and good friend Greg Lapin being the friend that poo-poos everything that isn’t produced by GLOCK. He spent some time behind the P-10 F and bragged about how well it pointed and shot.

The trigger was a shocking surprise as well. CZ spent time developing a gun based around the trigger and ergonomics rather than aesthetics. I can get behind a gun that isn’t the prettiest, but shoots like a dream. The best part of the gun might be the price tag. The $579 tag leaves plenty of room for upgrades like lights, lasers and extra mags.

If the AXG Scorpion wasn’t on your list it should be near the top. With so many firearms manufacturers cranking out lightweight shooters, the AXG Scorpion weighs over 31 ounces. If you like solid steel framed pistols this pistol shines.

A flat faced trigger allows a consistent trigger press all the way through the shot. One thing to consider with the AXG is that this is a carry-sized pistol rather than a typical full-sized option. I don’t mind the size because the weight of the gun makes it easier to shoot. This is a Sig Custom Works offering, which means you are paying for premium upgrades. However, if you want a gun to protect the home that is easy to shoot this is a great option. Adding a light to the AXG Scorpion will add even more weight, which can only benefit the shooter.

Talk about a gun that has garnered every award this year. The Ruger-57 is a no brainer for home protection. The 57 is revered for its ergonomics and trigger. I found the gun to shoot smoothly with little recoil - at least not as punchy as you would think.

There’s plenty of rail room up front for a light, and shooter’s have the option to order plates for a mounted red dot. I equipped the 57 with a Burris FastFire and found it added a bit of weight, which is great for increasing the shootability of the gun. I’m not sure I can add more praise to the Ruger-57. The reviews have been stellar and if you can find one be sure and pick it up quick.

Also, if you find ammo make sure you have the bank on standby because it’ll cost ya.

These are just a few of the guns that highlighted the year, but what makes a great home defense gun and why should you have one?

Well, a great home defense gun should be the gun you shoot the best. You are protecting your family from an imminent threat that wish to do you harm. I can’t speak for you, but I want a gun that feels solid in the hand, points well and shoots even better. Admittedly, my pistol shooting is less than perfect, but with the above guns I felt confident making the right shot.

You’ll also notice that many of these options possess the ability to mount a red dot on them. I’d highly recommend doing so. You can pick up the dot quick and make more precise shots during low-light conditions. As always, a weapon-mounted light is key to verifying threat vs. friendly.