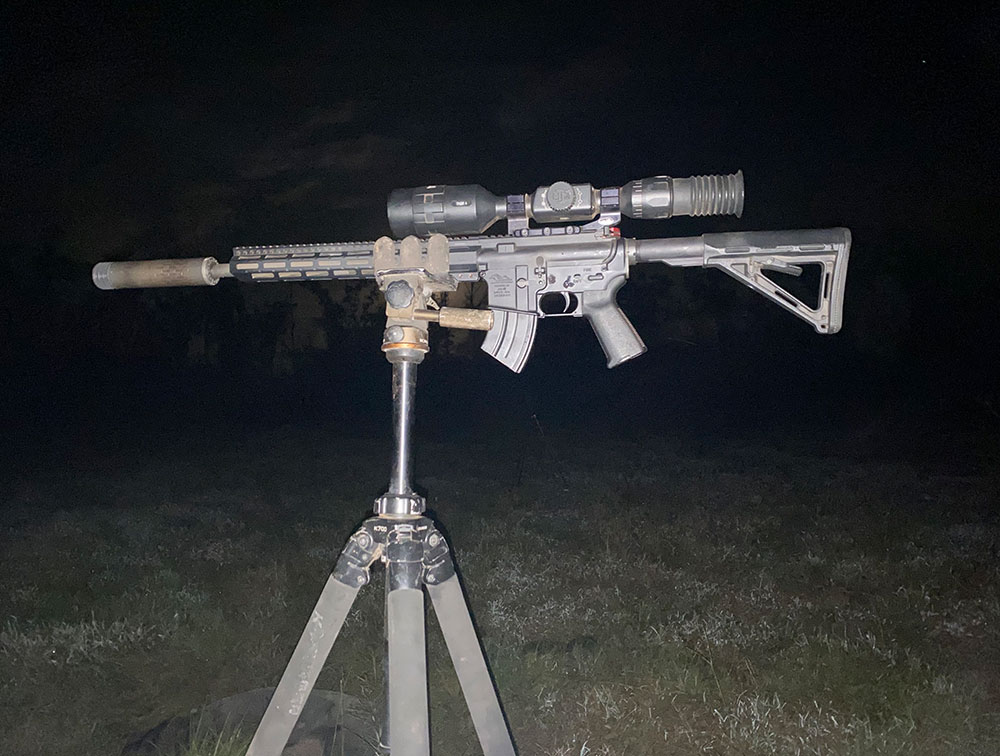 Night hunting is a different creature, especially when it comes to hog hunting. I never saw them during the daylight hours, and they've grown too wise and wary to let a mistake occur. Switching to thermal imaging is your ticket to lessen the negative impact hogs are placing on the countryside.

I love night vision, but thermal breathes new life into the night. I started out simple with the ATN X-Sight, and these optics are chock-full of features that deliver optimal performance. The only restriction I've found is distance, and night vision is only as good as the light output and throw of your IR light.

Fast forward, after utilizing the ATN night vision for a few years, I was able to jump into the thermal imaging game. I was fortunate to have ATN send a few Thor 4 optics for the entire Gun Talk team to test out. That moment changed how I looked at night hunting and my day hunt strategies.

The ATN Thor 4 is, again, exploding with features. Here are a few of my favorites.

With a 384x288 sensor, you can expect detection out to 750 yards, target recognition at 335 yards, and positive target identification at 205 yards. Think about that for a second. If you can detect a target at 750 yards, how easy will it be to develop a plan to get within shooting range? That is why thermal is a crucial night-hunting tool.

The range with the Thor 4 allows me to close the distance, whereas night vision is much closer, leaving less time for a plan. This isn't 100% the case every time in the field. There are times when thermal isn't the best. I had an issue a few years ago where the fog rolled through, and I didn't get the distance I'd become accustomed to. ATN isn't the only thermal device that runs into this issue. Fog is just a booger to deal with, and humidity builds its own problems. However, if you run at night during cooler months, nothing hides.

The hunting party crested the hill and instantly smelled hogs. It was the musky smell mixed with muddy water, unmistakably the feral pig kind of smell. We were coyote hunting and attempted to get out and set up early, but I knew the dog hunt was over if we located hogs. A quick scan of the area with the Thor 4 detailed 40+ hogs moving away at 300 yards. They had no clue we were in the area, so we hatched a quick plan to head them off. After covering plenty of ground, we took 8 out of the sounder. It was fast, but I can't imagine that night vision would have offered the same opportunity. It's helpful, but there's nothing out there that hides.

I'm about the most forgetful person. When tensions get high and adrenaline runs rampant, I don't always remember to hit the record button. Recoil video recording has literally saved my bacon on many occasions. I know most won't use video recording to publish, but it’s fun showing buddies that come over what these optics are capable of and how much fun they're missing. In all seriousness, don't forget to insert the SD Card.

The ATN Thor 4 has enough juice on a full charge to run an entire night. In fact, with the correct settings, you can get 18+ hours of continuous run time. So, if you plan on doing a mix of day and night hunting, never power down your optic. There are nights when I forget to power down the optic, and it's still truckin’ along when I ready myself for the next day’s hunt.

An easy way to get started on the hunt, the one-shot zero feature ensures you’re on target every time out in the field. The one-shot zero makes sighting in the optic effortless. Plus, think of all the ammo you save. I'd suggest sighting in the twilight hours. It offers enough contrast, but if you must sight in during the day, take hot hands with you and tape it to your target.

This is the first feature you'll likely encounter when you get a new ThOR 4, which may be your favorite. The bonus of having an easy sight in the process is utilizing several firearms. Once you finish the sight in, save the ballistic profile. Then, at that point, it is pretty much a plug-in and play situation.

I can't think of many thermal optics that you can purchase for under $2,000, and they just don't exist. If they do, I guarantee they aren't as feature-rich or durable as the ThOR 4. One of the best parts of the ATN sight is the opportunity to purchase refurbished units.

I've said it a thousand times. Now is the best time to start if you aren't utilizing thermal for hunting or scouting. Get what you can afford but get it as fast as you can. Thermal is the great equalizer in the field. In fact, it tips the odds completely in your favor. ~ KJ

Kevin Jarnagin (KJ) hails from Oklahoma but quickly established Louisiana roots after joining the Gun Talk team. KJ grew up as a big game hunter and often finds himself in a different venture often. Whether it’s making his way to British Columbia for elk or training with pistols, KJ always seems to find a gun in his hands and adventure on his mind.