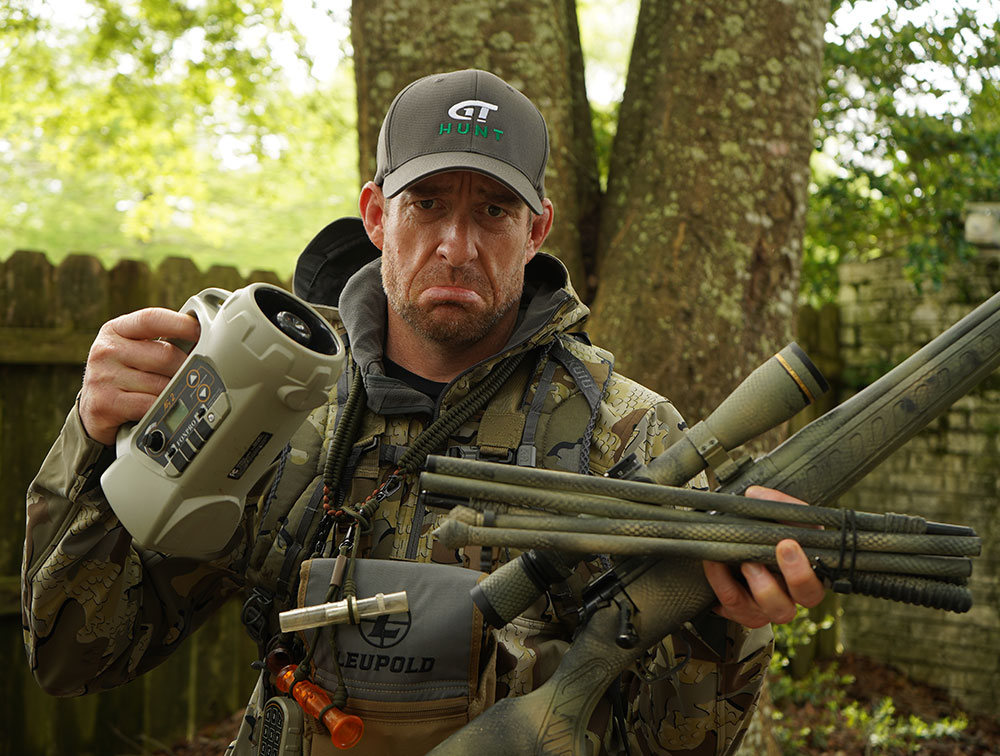 The Season That Wasn't Meant To Be

Perhaps it was bad timing, bad luck, or maybe my coyote season wasn't meant to be. I'd planned on two predator hunts out West, hoping to find a good bit of hot coyotes eager to meet me in the middle. I had gear lined out and each time the hunts were called off the night before I set sails. That didn't stop me from examining my gear to let you know what you need to take if you're lucky enough to pursue coyotes, bobcats, and raccoons.

The first trip was set to take place in Kansas. This would have been my first venture to the Sunflower State. Eager to arrive, I packed gear meticulously three days before. Two pieces of gear stood above the rest.

The hunt was a predator hunting contest, which included prizes for heaviest raccoon, heaviest coyote, heaviest bobcat, and overall best score. I didn't expect to win, but I sure as heck wanted to make a good showing.

When I set my eyes to something I jump head-on without regard. I got my rifle set up, which was my son's Thompson Center Arms Compact 22-250, a great little gun that doesn't take up a bunch of room. I topped it with the Leupold VX-3i optic that looked great. The glass Leupold is producing right now is some of the finest in the industry. It’s super clear, rugged, and doesn’t require schooling to learn how to operate.

I got everything set and decided to art this gun and optic combo up. I dug deep into my inner-most artistic side, which took a while to obtain. I snagged some webbing, painter's tape, and a few cans of Krylon and went to work. The final outcome was a mix of brilliance and madness with a hint of "what was I thinking?" The combo looked set to go on an epic hunt. It remains the case to this day. Insert sad face.

While I spent time on the range dialing the optic to the finest detail, I noticed first the clarity of the Leupold. I’ve run many Leupold optics, but it continues to amaze me how they're producing optics of this caliber without breaking the bank. I'd recommend the optic to anyone looking for a solid setup that allows the shooter to dial-up for shots that are longer or even at close range.

Don’t judge me, but as long as I was painting things I threw in my shooting sticks too. I believe the entire combo just works. Plus, if I was worried about a hint of dark shadowing pulling attention I’ve got to go all in.

‍
The Bog Dead Silent Kneeling Shooting Sticks are a staple in my daily-hunt carry. They cost somewhere around $30, are quiet, and are easily deployed. These are quality attributes, especially ease of use. The plan for the hunt was to cover as much ground as possible, which meant you had to trim weight. So, my plan to take a tripod quickly left the conversation. That's why the Bog Shooting Sticks was an easy choice.

I had the chance to use them on the range to make sure I was all set, and they worked as advertised. Never leave home without them.That was the first hunt that was canceled. Our team leader fell ill the day before his flight. Collectively, the rest of the team didn't feel right trudging on without him. That lead to the second hunt.

On this hunt, I was to guide a group called WildHERness. This group of fantastic ladies was eager to shoot some coyotes and potentially some hogs. I was excited about this one because it was on my home turf, and I knew the hunting would be off the charts. Unfortunately for the hunting party, the Oklahoma weather decided to go off the charts as well. I again decided to attempt to underestimate the situation and pack all the necessities and continue on with the plan. This was the wrong call, but I found even more useful gear that, again, sits in its case.

I recently put in an order for new camo. I decided since it was a new year it was time for a makeover. There’s not much I can do about the face, but camo I can change. I landed on Kuiu and packed a layer of Cabela’s Wooltimate for added warmth. The weather wasn’t supposed to get out of the 10s and I’ve developed thin blood since moving south.

Before you squawk about the price, I believe you get what you pay for when it comes to outdoor gear. The fit and finish on the Kuiu gear are unmatched and the patterns have a place on the properties that I frequent.

I do have some other camo companies that not many folks are talking about that will be big, but that is for a later time.

I ordered the Kutana Gale Force pant and Axis Hybrid Hooded Jacket in hopes to give it thorough testing in harsh climates. One thing I love about the Kutana Gale Force gear from Kuiu is the 100% waterproof shell. The conditions I encounter many times involve some type of moisture. The conditions I was headed towards were a mighty test for the clothing. However, I got as far as trying it on, looking at myself in the mirror and tossing it in the travel bag.

The Kuiu gear is well built, to say the least. There's not a burr on the clothing and it fits to form. I like my outer clothing to fit snug against the body but maintain movement to function on the hunt. I find more form-fitting camo is easier to layer and traps body heat better than bulky items. These fit the bill on every level. Now, if only the roads would clear I could give it proper testing.

At the end of last season, I left my call in disarray. The Foxpro call I ran had a good run, but it wouldn’t respond to the remote when extended to any distance. I’m taking a moment to call out the customer service folks at Foxpro. They helped get my call back in the game quickly and effortlessly.

The issue was the TX-500 remote GX7. They had issues with those models but rectified the problem. Once the call was returned, I tested it out at various distances and obstructions between me and the call. If you've ever had problems on a set where your call would go out intermittently pay attention to what's between you and the call.

Through all my tests the call worked flawlessly. It was so effective in my testing that I called in two neighborhood dogs and one very curious cat. And…yet again, the call remains in my bag. A big disappointment, but in the end, it's to err on the side of caution.

Gear is a big part of the hunt. I geek out on gear, but it’s equipment that I trust. Really, the only new gear that I purchased for the hunts were Leupold glass and Kuiu camo everything else is in my daily hunt rotation. I hate that the weather prevented me to give you an in-depth review of each, but sunny days are ahead. ~ KJ