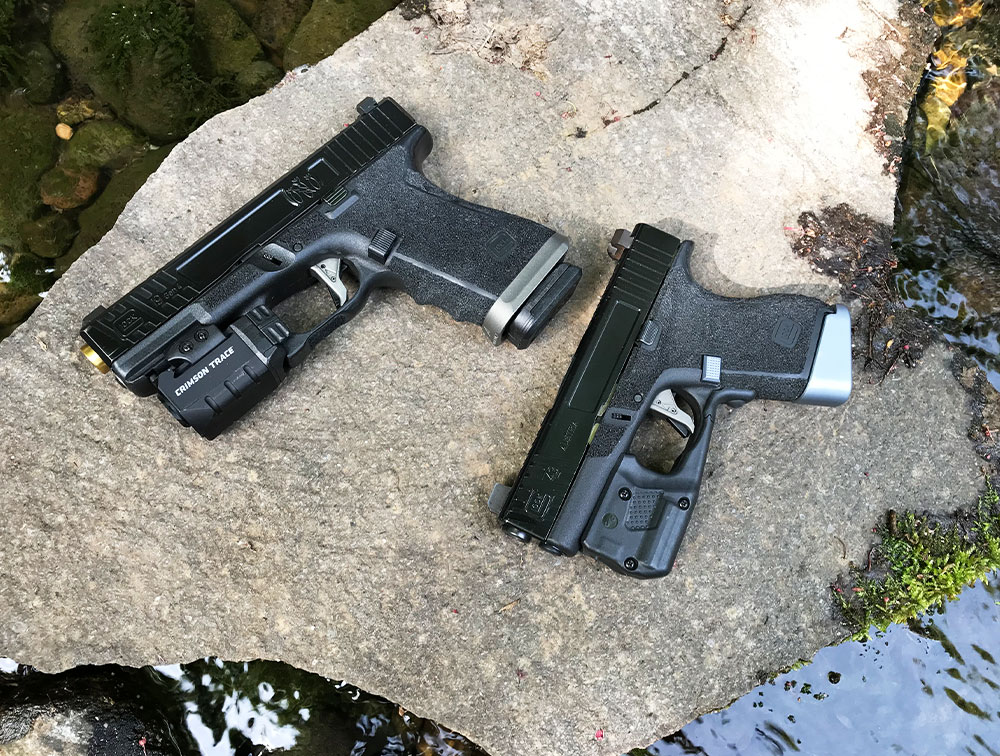 If you follow Star Wars canon, you may be familiar with “The Rule of Two”. It is a philosophy/strategy implemented by the Sith Order, (that’s the bad guys). You have a “master” and an “apprentice”. The master imparts his wisdom upon the apprentice, and the apprentice in turn learns the Dark Side of the Force with the ultimate goal of becoming the master himself - taking on his own apprentice. Think Darth Sidious (master) and Darth Vader (apprentice).

What does that have to do with guns? Well, nothing really - except that I have my own Rule of Two that applies to defensive pistols, and there is sort of a master/apprentice relationship.

The entire philosophy/strategy is based around having a service-sized defensive (fighting) pistol, and a concealed carry pistol system that complement each other. In sticking with the polarizing Star Wars theme, let’s break this down.

This is your go-to defensive pistol. If you take a training course, you’re taking it with this gun on your hip. If you needed to fight with a pistol, this would be it. This firearm has fired more rounds than likely any other weapon that you own, and it feels like an extension of your own hand. It’s familiarity is comforting, and you trust it with your life.

In my case, this pistol is a customized GLOCK G19 Gen4 with all sorts of upgrades* that make it unique. The frame has been stippled, the triggerguard undercut, the slide machined and coated by Danger Close Armament, the trigger system replaced with an Agency Arms flat trigger and Ghost Inc. connector, upgraded XS Sight Systems F8 Night Sights, and a Crimson Trace CMR-204 Rail Master Pro light/green laser system on the rail.

This is your daily carry pistol. Although you may carry your “master” pistol quite often (good on you), it is likely that you have a dedicated subcompact or micro pistol that is more convenient and comfortable for daily carry and concealment. It should also feel familiar to your hand. This gun has probably been shot a little less than your go-to gun just by sheer comfort and volume training, but it should still provide you with the same familiarity.

For me, that is a GLOCK G43. It has also been stippled, (I’ve learned to live with the “rub”), - by the same craftsman and the slide work also performed by DCA. The trigger system & connector is identical, as are the iron sights. This little gun also wears a Crimson Trace light/green laser unit up front.

Why does this work? It works because both pistols are extensions of each other. Yes, the size, grip, weight and other geometrics are different - but when drawn from the holster, sight picture acquired and trigger pressed, they “feel” the same. They are as close to interchangeable as I can make them.

I am looking at the same XS F8 front sight with either gun. I’m experiencing the same trigger experience with either gun. The tactile feel of the frame is familiar between both as well. Of equal importance are the laser sights. Both are sighted in for the same distance, (more on that in an upcoming article).

The G19/G43 set up that I use has been in my service for a number of years. I am beginning to augment and cross train with Red Dot Sight systems and different pistol makes and models, and my master/apprentice strategy may also change down the road - once my training and repetition with those systems is up to par.

You can set up your own Rule of Two with offerings from many manufacturers:

These are just a few selections and there are countless more. Obviously, there is no hard and fast rule that it has to be a two-gun system from the same manufacturer. You may be able to replicate the same principles of feel, sight picture, trigger press and familiarity with your own experimentation and training.

Thanks for reading! If you have any thoughts on this topic, I’d love to hear them. ~ GK

*Many years and many training hours have been spent on countless parts and configurations. Some did not work well. Some worked well, but did not work well for me personally. Do your research, buy quality, and spend the time making sure your upgrades work flawlessly and dependably before trusting them on (or in) a defensive pistol.