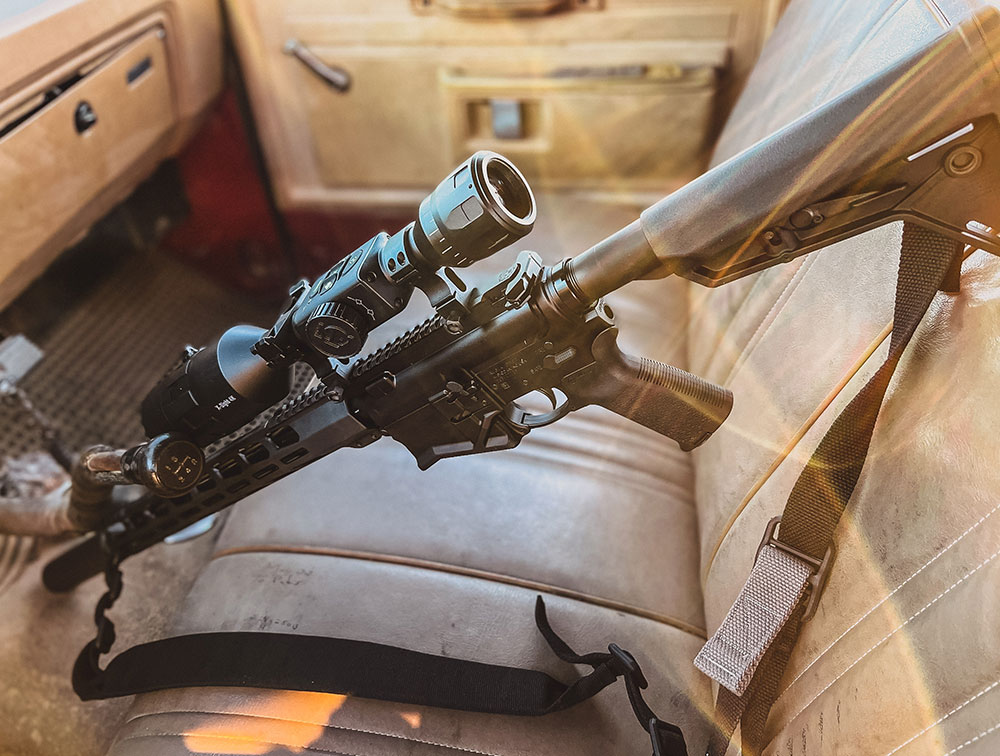 As the old Power Ram eased into camp, the sun stretched across the west Texas horizon. Steve Jones of Backcountry Hunts stepped out, unsure of what firearms we selected for the Scimitar Oryx hunt. Steve doesn't have much to say about the Ruger SFAR, but by the end of the trip, he couldn't help but see the benefit.

I've hunted on multiple trips with the AR platform. Our current administration would have you believe there's no room for the AR in the woods. Well, I think we all agree that the claim is false. I have reasons why an AR makes all the sense in the world, and it comes from experiences in the field.

Animals do three things. They sleep. They eat. They breed. Simply put, they survive. Every animal on the planet is programmed to survive by any means possible, which makes them incredibly tough to take down. My first experience with Scimitar Oryx showed how much the will to live is engrained in these creatures.

I was shooting a guide’s bolt-action 7mm-08 that sings on the range. I put three shots into the boiler maker, and the Oryx finally went down. All good shots, but the fight to live was something to behold.

The hide on these critters is incredible, and their hide on the vitals and front shoulders remind me of a feral hog. Scimitar Oryx originally roamed the plains of North Africa, so their bodies were designed to lessen the impact of lion claws digging into their hide. It's incredibly thick, and a shot on a high shoulder rarely impresses.

Here I am, nearly 10 years later, in pursuit of the same formidable creature. We ran the Ruger Small Frame Auto-Loading rifle. It's chambered in .308 and was designed to be lightweight for such applications. It’s a hunting man’s AR-10, weighing 7.3 pounds and available in 16-inch and 20-inch models. I selected the 20-inch model to run, and Ryan went with the 16-inch model. So, why would we choose the Ruger SFAR for a hunt?

If you've ever been hunting, you understand that not all shots are perfect. If someone tells you they never miss or are perfect every time, they are either a liar or have never been in the field. I miss, I make poor shots, and I am not a liar. You get what you see.

That is why the SFAR makes so much sense. When utilizing the AR platform for follow-up shots, you have no need to run the bolt and remove one of your points of contact from its placement. I pressed off my first shot at the old west Texas bull and completely blew it. We are talking swing and a miss type of blown shot. One that even surprised me. No excuse. I was back on the bull when the guide voiced the whiff. The shot was off and connected high shoulder, a good enough shot to bring down any whitetail. However, remember talking about the thickness of shoulder hide? The bull sped off like he wasn't even hit.

My guide, Dave, and I began the tracking job one spot of blood at a time. I've never felt so worthless. My second shot felt great, and Dave remarked how good he felt. The pit in my stomach said otherwise. I was sick because we were finding fewer and fewer droplets of blood. That was until a call came over the radio saying they saw my bull limping badly. The other crew asked if they wanted me to put the bull down, and I couldn't yell YES fast enough.

That's what you do in a situation like that. Anchor the animal as quickly as possible. I still felt the shame of a bad shot, but it happens. Luckily, Graham Rockwell of Ruger was running overwatch when they spotted my bull. Unlucky for the bull, Graham's crosshairs painted the crease of the hide where the orange and white hair collided.

He placed his shot precisely and brought the Oryx down. As Dave and I neared, the Oryx shrugged off all shots and stood up. At 430 yards, Graham sent another round, again anchoring the tough animal. Dazed from what just happened, the Oryx was still alert but down. This allowed me to put the final round right behind the shoulder.

The ordeal was done. This reaffirmed my knowledge that Scimitar Oryx are tough, and I loved hunting with a lightweight AR-10.

My first hunting AR-10 weighed roughly 17 pounds when I put her on the scale; back in the day, that wasn't awful, but still not like the diminutive SFAR. I sprinted the half mile to the downed Oryx to get the final shot. If you think I'm running with a 17-pound AR, you are crazy. With every footfall, I was thankful I wasn't lugging a monster AR-10 around. The Ruger SFAR felt and carried like any other lightweight hunting rig, but it was an AR-10.

I believe that is the most significant advantage of the Ruger SFAR. This sucker is light and doesn't kick like a mule. Running the gun off a tripod, I could stay on the Oryx without recoil. It did help that I was running a Silencer Central Banish Backcountry suppressor. Even without the suppressor, the Ruger 2-port Boomer muzzle brake included with every SFAR keeps recoil manageable.

Not one Oryx on the trip fell with one shot. They weren't poor shots, either. Every shot taken would have rocked any whitetail to their core, but not Oryx. These things made a living surviving in the harshest arid environments. They understand the survival of the species above all else. They don't go down lightly.

Every second counts during the hunt. If you plan on hunting tough animals, anticipate a follow-up shot. I can run a bolt gun quick, but not at breakneck speeds like the AR platform. Now that the SFAR is on the scene, I have follow-up speed and a lightweight rifle that I don't mind carrying into the field. ~ KJ