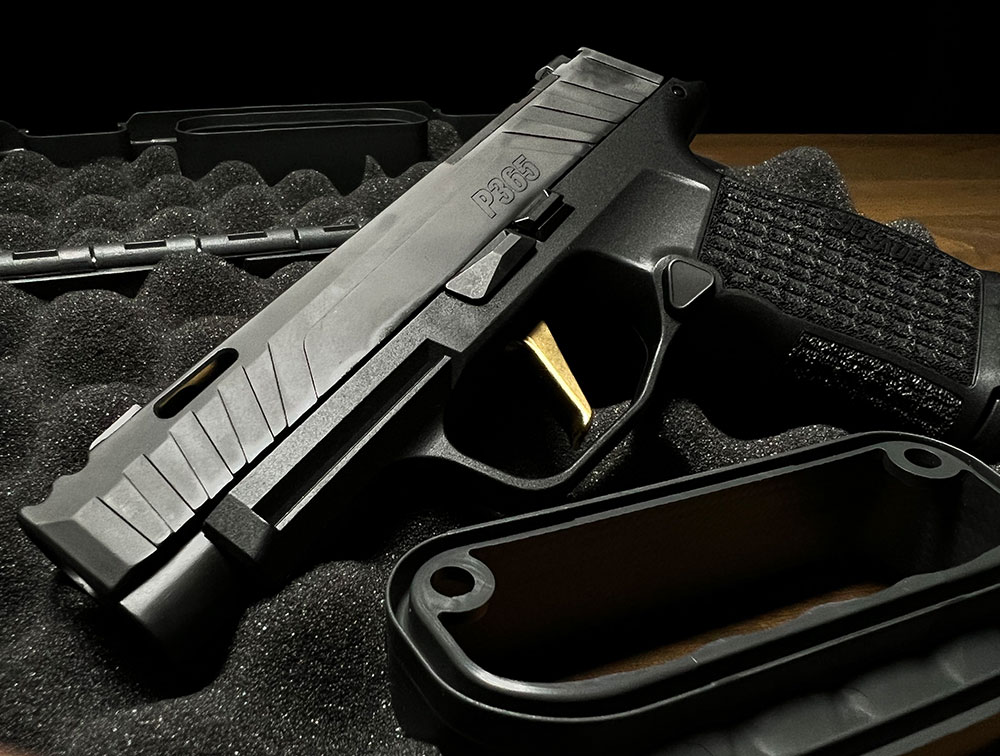 The Sig Sauer P365XL is one of the top-selling concealed carry guns on the planet. Sig continues the legacy by offering the P365XL Spectre Comp, which is the first production pistol with slide-integrated compensator. This one came to the office with just enough time to get a few shots down range.

The P365XL fits great in the hand, and the XSeries Grip Module adds a bit of bite to handle in any conditions. On the downlow, I really do like the laser engraved grip texture. I don’t worry about the grip snagging on a shirt when carrying in the appendix position. If you clear the shirt with force there won’t be any issues in the draw cycle.

Custom Works designed slide, which cut to receive an optic. This cut accepts the Sig Sauer ROMEOZero red dot, which is the same as a Shield RMSC and J-Point mounting footprints. The mounting plate position is moved forward of the rear sight. That makes it nice because you can co-witness if that’s your thing.

GOLD BARREL! The Titanium Nitride barrel is flashy for sure. I don’t mind the bling of a gold barrel. It provides a little accent color instead of the standard flat black coat.

I don’t mind the gold trigger either. It has a similar feel to the P365XL. So, if you’re familiar with the P365XL trigger you’ll appreciate the feel.

If companies aren’t producing guns with 12 or more rounds in a micro compact it’s going to be difficult to compete in today’s market. Thankfully, Sig Sauer is on top of the trend and offers two, 12-round magazines with each P365XL Spectre Comp.

This is a new one for me. No, not the compensator on a pistol part. It’s the simple fact that Sig Sauer integrated the compensator into the pistol slide. While most comps are affixed to the barrel the P365XL Spectre Comp is built into the slide. In fact, the slide length remains the same of the original P365XL.

This is a great addition to any concealed carriers EDC collection. Having a comp integrated into the slide makes the gun even more controllable, which in turn equals better accuracy on follow-up shots. Holsters won’t be an issue since holsters you already have that fit the P365 also fit the P365XL Spectre Comp. Enjoy this one, because it’s a big look at things to come for a company that does it all. ~ KJ