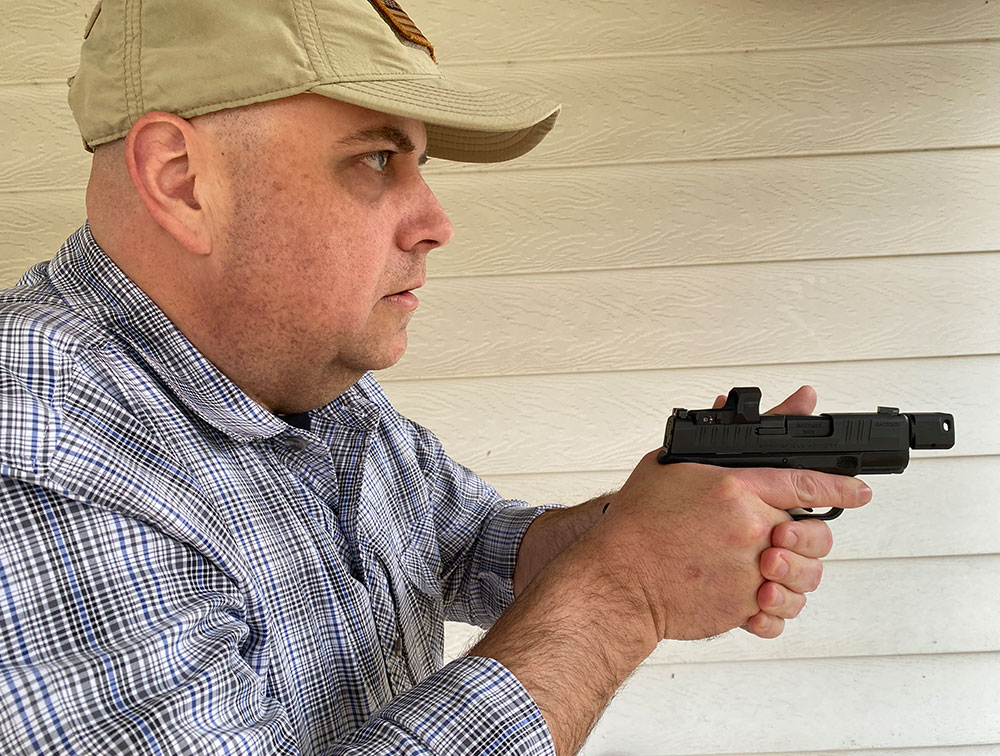 When Springfield Armory introduced the original Hellcat a couple of years back, everyone was still drooling over Sig’s P365, which showed that a compact pistol could carry as much ammunition as a full-size gun. Not one to sit back and let someone else dominate the market, Springfield one-upped Sig by adding an additional round (11 instead of 10 and 13 instead of 12) to each magazine. But lest we think this was only a chest puffing contest, the Hellcat was more than just a response to it competition. It was a standalone gun that featured several designs that gun owners had been begging for.

Springfield took an interesting approach when designing the Hellcat. They chose to start fresh with a whole new gun rather than add another installment of the XD series, a wise choice in my opinion. While the XD is certainly a quality firearm, the Hellcat needed to be completely different.

Now Springfield has improved the Hellcat even more with the Hellcat RDP, which stands for Rapid Defense Package. There are several features that set it apart from the original and made it stand out among the increasingly crowded higher-capacity compact gun market.

The Hellcat RDP’s design comprises the best of a concealed carry pistol with its overall 1-inch width, 3.8-inch Melonite barrel, and 4-inch height (4.5-inch with extended magazine) with features formerly only found on full size guns, namely a red dot and two magazines with more than 10 rounds each.

While the Hellcat likely won’t win Sexiest Gun Design of the Year, thanks mostly to its overall boxy appearance and brutish lines, the designers at Springfield were certainly focused more on function than form. That’s not to say it’s ugly. Perhaps “beefy” is a better term. But they were clearly more concerned with a gun that did its job rather than looking good.

One significant internal upgrade from the base Hellcat to the RDP is the trigger. It doesn’t look all that different, but the feel is much improved. While the older one was decent if not a bit sluggish on repeat shots, the upgraded shot squeezer feels a bit crisper. Springfield claims the new trigger is more ergonomic than the original, but I could not tell a significant difference against my finger. Whether or not the ergos were improved, the overall function of trigger pull is better on the RDP.

Here is where I wasn’t so sure about the RDP. A compensator on a carry gun? Really? Is that necessary? Or is it a marketing gimmick? In theory, the three cutouts on the top and sides should siphon off gas pressure up and sideways like an AR muzzle break, thus reducing recoil and muzzle rise. Would it make a difference on such a small gun?

What better way to find out than to shoot it? So I grabbed an assortment of loads and hit the range with my 13-year-old son. We shot everything from 124 grain ball ammo to 115 grain hollow point and 100 grain HoneyBadger rounds from Black Hills. Everything ran smoothly, with no jams, malfunctions, or other issues from any of the ammo or the gun. They all played nicely together. As for the compensator, could I tell a difference? For science (of course), I removed the compensator and shot some rounds for comparison. The verdict? The compensator did seem to make a difference in felt recoil, with follow up shots easier to hit. Was it a huge difference? Not really. But that doesn’t mean the compensator is useless. Just don’t expect it to make a 9mm shoot as flat as a .22.

The main reason I’m all for the compensator is how it’s attached, and I don’t mean the fact that it’s self-indexing, although that is a slick feature. What caught my eye is the .5x28 threading, which allows the addition of, wait for it, a suppressor. That feature alone might make the Hellcat RDP worth buying.

Here is where Springfield has significantly stepped up their game. Not only is the gun new but so is the optic. Springfield has chosen its proprietary Hex Wasp 3.5 MOA red dot with a profile low enough to co-witness with the tritium/luminescent front and u-notch rear sites, making zeroing super simple and allowing the shooter to use the sights should the red dot fail or run out of juice. Springfield claims the Hex batteries will last 10,000 hours, so this might not be an issue for most owners, but it’s good to have reliable backup just in case.

Kudos to the clever marketing folks at Springfield, by the way. Guess how you adjust the red dot. Any guesses? Hint: it’s not the typical micro flathead screw. If you picked “hex screw” then you might be the master of the dad joke. But it’s fitting for the Hex Wasp.

Just in case you prefer a different red dot, the base plate will work with any similar optic, making an easy swap.

As of this writing, only a handful of holster makers had products able to accommodate the compensator. If you find a slide-type holster with an open bottom, it will likely be fine. But most current full holsters do not have room for the extended muzzle.

While the Hellcat is not new, there are enough significant new features on the RDP version to stand up and take notice. Overall, the grip was good, picking up the dot and sights was easy, and the gun shot reliably and accurately with no malfunctions or other issues. At $899 MSRP, the Springfield Hellcat RDP is absolutely worth a look. ~ David