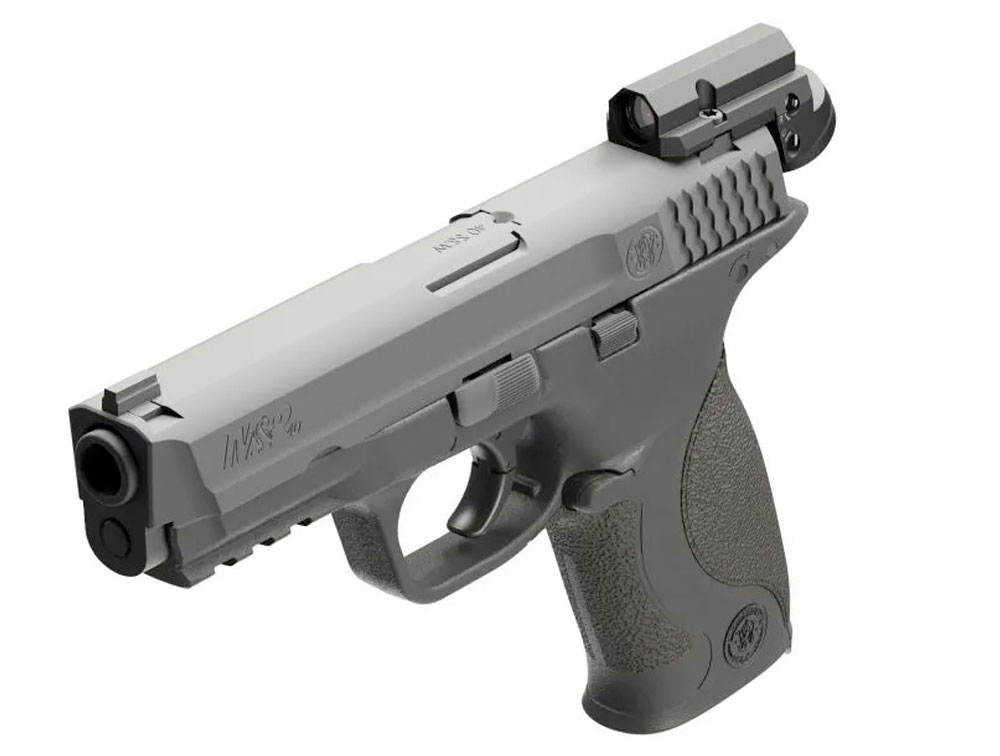 On January 7th of 2021, I watched an industry live stream that just happened to be put out by Gun Talk Media. They just happened to be discussing something about to be released, which my daily carry a firearm (the Smith and Wesson M&P 9C) wanted. That is a red dot optic that could be added to my firearm without the need to mill my slide or perform other intense and non-reversible modifications. When it comes to my daily carry firearm, I want to ensure that I have a 'back out' plan if something goes wrong or I realize that the option I pursued does not fit my needs. In other words, I want to be able to revert to the previous state without permanent alteration. Leupold was about to bring a product to market that would do precisely that: behold the DeltaPoint Micro.

This red dot optic was explicitly designed by Leupold for use on Glock and Smith and Wesson pistols to satisfy the demand in the industry for an optic that could be installed without the need to mill the receiver. My first thought was, “My pistol wants this!” While watching Ryan and KJ discuss this seemingly excellent optic, I opened another browser tab, checked a few of my preferred online sellers of guns and gear, and found one that was taking pre-orders. Before the end of the day, I had pre-ordered it. Now, fast forward to the week of November 15th, 2021, and I got an alert that a package was on the way! Would this optic live up to the hype? Would it meet all the needs and wants in a slide-mounted red dot optic? Would the packaging be attractive and straightforward to open? Will all my dreams come true once I opened this package?

Well, to answer those questions, I had to use this shiny new gizmo. The instructions provided by Leupold were straightforward to follow, and the mounting hardware provided was machined to a precise fit. The process of mounting the optic to my firearm was far easier than I anticipated! I had heard some horror stories from others about stripping or otherwise damaging the set screws in the rear sight on the M&Ps previously. Still, being cautious and applying the correct pressure, I safely removed the screws without damage. Once they were out, I was able to remove the sight using a brass punch. The provided dovetail mount slid perfectly into the slot, and centering it on the slide was simple, as it was engineered to be the exact width of the slide. This means that the two screws are symmetrically aligned, and the unit is centered by default upon mounting. Great design so far!

Next, I turned on and familiarized myself with the function of the unit. While not quite as intuitive as other optics I have used, having a single button interface that controls all the optics functionality is a simple interface with a short learning curve. It was easy to learn and operate, and I adjusted the brightness up and down until I found a point that works well with my eyes in both bright and dim conditions. (I suspect if I drew with someone pointing a bright flashlight at me, I might lose the dot in that level of light. However, I did not test that theory.) The brightest setting was so incredibly bright that I could barely see my front sight in a dim environment, let alone anything beyond the weapon. It shines as brightly as you want. Adjusting the windage and elevation was simple. The provided instructions were precise about the direction to move them. The adjustments are snug but easy to adjust as needed. They are also recessed deeply enough into the housing to not be jostled or bumped unintentionally.

Now it was time to move on to the practical applications. Before reloading my firearm after reassembling it, I did several things:

Going through the above actions was very educational for me. Not only was this my first time putting a red dot on a concealed handgun that I carry every day, but it presented some additional challenges, which I'll get into now.

The most significant change was the sight picture. The DeltaPoint Micro has a very small aperture. This serves the purpose of keeping the unit small and aiding in concealment and carries the added benefit of allowing the optic to function as a ghost ring if the battery fails or the optic otherwise fails. However, it also means that picking up the optic with the eyes is not as natural or intuitive as picking up the rear sight. This means that it is going to take some practice and effort to learn some new muscle memory for bringing the firearm up in such a way to enable the eye to grab the optic. My concern (which I hope to address with added testing, practice, and training) is getting an accurate sight picture from awkward angles, difficult shooting positions, and other challenging scenarios. Being aware of the possibility of shooting from 'other than range’ positions makes holographic dots and other large aperture optics very useful in stressful shooting situations.

From a concealment perspective, I was frustrated with the optic. It does increase the overall footprint of the firearm, which changes the profile against the body. In scenarios where I might have printed a little, I do print a little more, not because of the increased height of the optic on the firearm but rather the length. But that’s not the worst part. Surprisingly to me, the rubber cover of the battery cap tends to grab the inside of my cover garment. This leads to printing that does not happen otherwise and the shirt getting pulled up and losing concealment depending on my movement. I’m still experimenting with different shirt materials, differing positions of concealment, and other variables to determine the consistency of this issue. Currently, I carry anywhere between 2 o’clock and 4 o’clock, depending on my clothing. This is happening at all positions, with tee shirts, polo shirts, and dress shirts.

From a draw stroke perspective, the movement of my right arm is unchanged. However, I find that the extra length requires additional movement from my left hand, clearing the cover garment. This is not surprising, but its shape is not what is often referred to in the industry as low drag. That rubber cover on the battery cap again has greater friction with the shirt and causes snags and hang-ups if I do not move the garment far enough. Another muscle memory change.

Now it’s time to talk about the zeroing process. Leupold recommends that after you have mounted the optic, you adjust the windage and elevation until the dot is essentially sitting on top of the front sight when you acquire the site picture. That’s a sound practice if you don’t have any other tools available. Now, as I mentioned earlier, I happen to still have my Crimson Trace Laser Guard green laser on my gun. This means I have two different colored points of light that I can see when looking through the dot. This made zeroing to the laser at 20 feet extremely easy. I was able to co-witness the DeltaPoint Microdot to exactly land on the laser's dot. When I took it to the range to test, and I turned off the instinctive activation on the CT, my shots were landing very close to where the dot was immediate. I call that a success. An alternative but similar method would be using a bore-laser in the appropriate caliber to co-witness in the same fashion. That gets you on paper out to 50 feet, and you can zero at whatever range you desire from there. To sum my experience with the zeroing process, it was easy to co-witness the red dot to my laser. Once I had it at the range to check the point of impact, it was perfectly on at 20 feet – the distance where I co-witnessed. Perfect!

Speaking of the range and shooting this: Excellent! All my complaints and concerns about the concealment and other issues melted away while shooting. Sure, it took a few draws and a few dry fire drills, and a few times with live fire before my eye learned how to see the dot exactly the way I needed. But within 20 rounds, I was performing as well with the red dot as with the laser and iron site combination prior. Now, I’ll add here that I’m NOT a top-notch pistol shooter. I’d say I'm a solid smack dab in the middle of the average kind of guy when it comes to keeping shots in the bull’s eye at 50 feet. And with this product, I was performing exactly as I'd expected too quickly. Yes, it will take more practice and drills to completely adapt to it. However, I’m confident that it will not be overly challenging to adjust. I'd have to say this will likely be a more effortless adjustment than going from irons to a laser was. I’ll also add here that the optic held zero through the first 100 rounds. No shifting, no noticeable change to the point of impact, and no need to make further adjustments yet.

By now, you are probably asking, "What's your conclusion?" Well, it’s a complex one. While I’m thrilled with the ease of installation, the ability to roll back the install without permanently changing the weapon platform, its functionality, and other aspects, the issues I am running into with concealment are concerning. I will continue to experiment with that and adjust and see if I can find a happy place. My initial intent was to remove the laser, get a weapon-mounted light, and have the red dot plus light combo on my daily carry. However, until I'm delighted with the solution, I won't be removing the laser. They co-witness at 20 feet, and out to 60 feet, they are incredibly close together, so I don't have to struggle with picking an aiming point. However, if I just cannot be happy with the impact on the weapon's concealment, I intend to move this to one of my other M&P pistols and add the light to that one. Just because my daily carry doesn’t get the treatment doesn’t mean another one will not get it. I like this product well enough that it is going to be used somewhere. The final state remains to be determined. ~ Boyd

Boyd is an avid shooter, hunter, and defensive use of force student.  He teaches introductory firearms classes to any who asks and is always trying to learn from the best.  While his profession is in IT, his passion lies in the outdoors, where you can often find him hiking, camping, or otherwise enjoying them with his family.