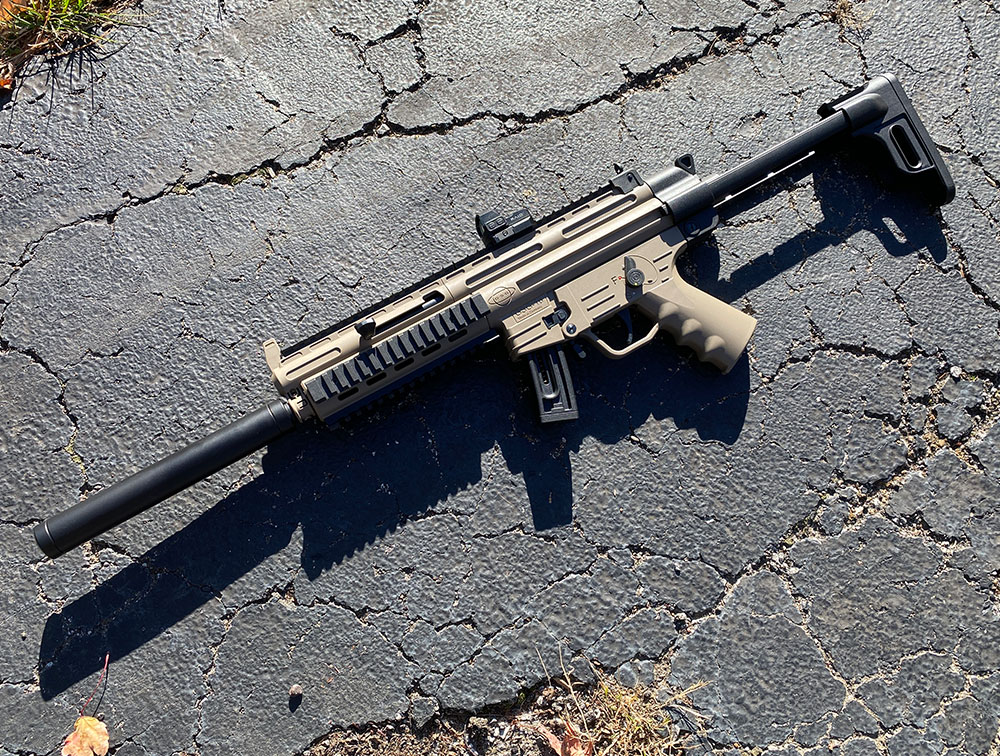 What if I handed you an MP5 lookalike, but in .22LR? What if I told you the gun I just handed you was under $400? Do I have your attention now? While the GSG-16 isn’t identical to its 9mm cousin MP5, it’s pretty darn close, and just as much fun to shoot.

When German Sporting Guns introduced the GSG-16 in 2019, suddenly everyone who wanted the cool factor in their .22LR stood up and took notice. The GSG-16 replaced the GSG 522, building upon the earlier model’s success, but with a decidedly new look. The GSG-16 is a bit beefier and offers more rail options. Let’s get into the overall performance of the updated model.

Made to look like the venerable MP5 (but not officially because of trademark issues), the GSG-16 starts with an aggressive design that differs tremendously from the hunting rifle look typically found in .22LRs. Think Ruger 10-22 and others. Instead, it goes for a more tactical look like the trend in AR-style plinkers found in many a gun safe nowadays.

This more tactical look allows for copious amounts of Picatinny rail along the top of the gun from sight to sight and surrounding the handguard on all four sides, encouraging all sorts of accessories such as optics, lights, and foregrips. I found it strange that the handguard rail was mounted on M-Lok – seemed redundant -- until I realized the genius of allowing the shooter to remove the rail and place M-Lok accessories on instead. Smooth move, GSG, very smooth.

Two tactical carryovers that clearly set this rifle apart from others in the same price range are the HK-style slappable charging handle and the fully ambidextrous, gigantic fire selector switch. The fully-reversable handguard-mounted charging handle sits well in front of the chamber and is a ton of fun to slap to close the bolt on mag changes. It’s almost worth practicing mag changes more often just to play with it. And the fire selector has an enormous switch with big F and S lettering so there is no doubt when the safety is on or off.

The finishing touch on the tactical design is the faux suppressor barrel shroud. While it may seem a bit campy to some, I think it’s a nice addition to a gun that is designed to be taken seriously yet has a little fun about it. If you don’t like it, it comes off, but why remove it? If you’re that self-conscious about the way a gun looks, this might not be a good choice for you.

So it looks cool, but how well does it shoot? For science, of course, I sent about 400 rounds downrange because I had to fully research the gun, right? The owner’s manual and the stamp on the side of the mag well both say to use only high-velocity ammo, which is typical of .22s because small caliber ammo can be finicky and lower velocity rounds might not generate enough blowback power to cycle the bolt. I dutifully followed the instructions and ran it with CCI Mini Mag 36 grains that flew at 1,260 FPS and the gun ran perfectly with zero malfunctions.

Then I brought out my inner rebel and stepped down to some old Federal Auto Match 40 grain that had been sitting in my safe for a while, so I expected it to induce malfunctions. Nope, nada, nyet. It ran just as well as the higher velocity rounds. The one malfunction was user-induced because I didn’t seat the mag properly, creating a jam. Not the gun’s fault.

Mag changes were super easy thanks to a double switch: an AK-style release by the mag and an AR-style release on the side. Both were simple to operate and dropped the mag out with no issues every time. Need a spare mag handy? The telescoping stock has a slot built in to hold the spare easily accessible by your support hand.

From start to finish, the GSG-16 performed like a champ, an especially impressive feat for its price range. At $339.95 from American Tactical, the GSG-16 is a great tactical style plinker that ran practically flawlessly on a variety of ammo with various grains and velocities. ~ David