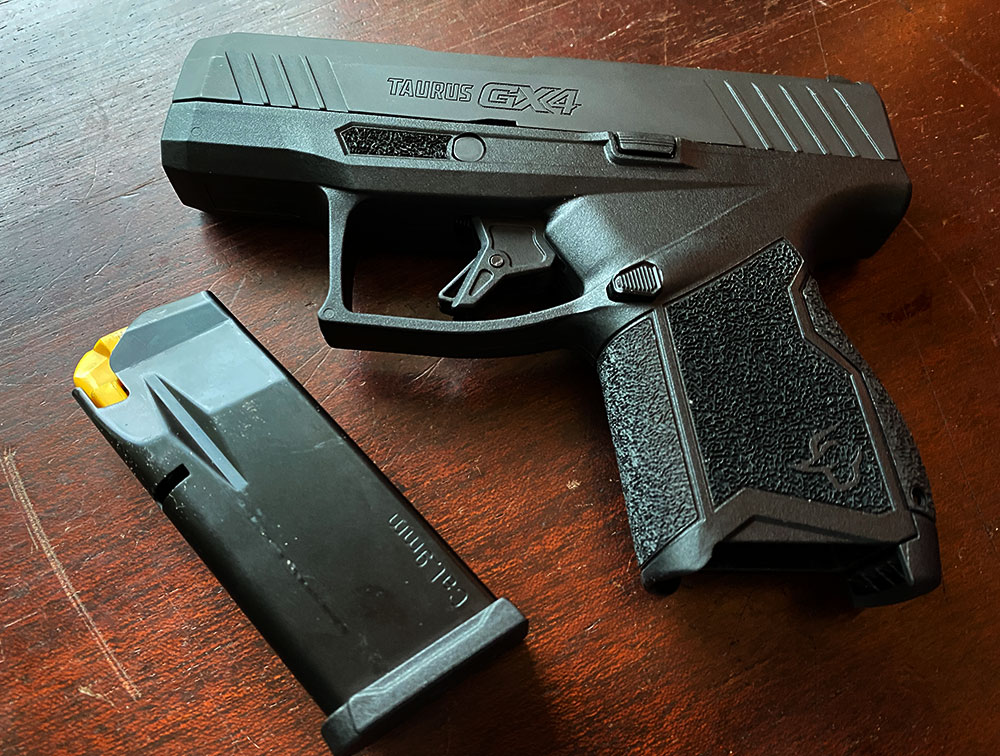 Taurus just threw their hat into the compact concealed carry ring – and did it with the flair of a matador! While the new GX4 may not be the leader of the herd, it can certainly stand up to the competition. Let’s take a look at the goods and bads of this serious new contender.

Let’s start with capacity, the main reason for this new category to even exist. Sig started with the P365 and its voodoo magic of sticking 10 and 12 rounds into a subcompact grip. Soon, Springfield followed with the Hellcat, then Smith & Wesson brought out the Shield PLUS with 11 and 13 rounds. Now Taurus has joined the fray with two 11-rounders as standard.

Speaking of the grip, Taurus did an admirable job with the texture: not too smooth, not too rough. It’s aggressive enough to maintain hold with sweaty palms but not too aggressive that it hurt after a range session. Grip length is a bit of an issue, but it’s hard to find a subcompact that doesn’t cause the expect pinky flop off the end. The GX4 feels like a bigger gun in the hand, and after a few rounds I forgot all about the grip length issue, as the gun seems balanced and shot very well for being so small. Taurus threw in an extra swappable backstrap, but I didn’t notice much difference between the two when shooting.

Concealability is top notch, with a 1-inch-wide frame and slide. While the grip is a bit thicker than some other compacts, it was not too wide and hid easily under a t-shirt.

Spring tensions in both the magazine and slide were light enough that looking rounds in the magazine and racking the slide were easier than on other subcompacts. Not sure if Taurus did that on purpose, but it works regardless. The slide stop also surprised me. Unlike a lot of its competition, the GX4’s slide stop was easy to operate with my thumb. Typically, they are too small and under too much tension to flip closed. Not this one. It was so easy it almost startled me.

One often overlooked feature when designing compact pistols is the trigger guard size. Taurus did not overlook it. Instead, the GX4 features a large trigger guard, big enough to comfortably insert a gloved finger without the danger of accidentally pulling the trigger in the process.

For a moderately price gun, the GX4 has a really nice trigger. The flat face design includes an integrated trigger safety that operates smoothly, a solid shot break point, and a crisp reset that works better than some higher priced guns inside and outside of the class.
‍

As much as I like the Taurus GX4 – and it has a lot to recommend it – like all guns, it has its flaws. There is no perfect gun, after all, and this one is no different. Here are a few things I wasn’t so thrilled about.

First, the sights. I’m not a big fan of blacked out rears, which are standard on the GX4. While they are ribbed to reduce glare (a nice touch), it would be nice to at least see white dots on a gun designed to be brought up on target in a hurry. The front sight has a dot, but it’s dim. A day glow front sight would be a welcome upgrade. Granted, that might up the price out of Taurus’ target, but most gun owners are willing to pay a few extra dollars for something that makes shooting easier. Fortunately, replacing these sights is simple, so you can always upgrade post-purchase.

Next is the takedown system. It’s, well, odd. And a bit inconvenient. It’s not odd like as in you’ll never figure it out without YouTube. It’s just requires a flathead screwdriver, which makes field stripping a challenge if you don’t keep one handy. Plus, the mechanism is on the other side of the gun. Not a deal killer by any means, but something be aware of.

Third, there is no accessory rail. Not even a stubby, single spot one. This may not be a huge miss, but it might turn some potential buyers off.

Finally, no optic plate. While the rest of the market started adding optic plates a couple years ago, Taurus inexplicably chose to leave off this ever-increasingly important feature. All the other guns in the class either come with one standard or offer it as an add-on. I would like to see this as at least an option should Taurus ever create an upgraded version of the GX4.

If you’re looking for a budget-friendly, no-nonsense, frill-free concealed carry gun that checks all the basic boxes and a few extras, the Taurus GX4 at $392.42 MSRP is well worth a second glance. Final grade: B+ ~ David