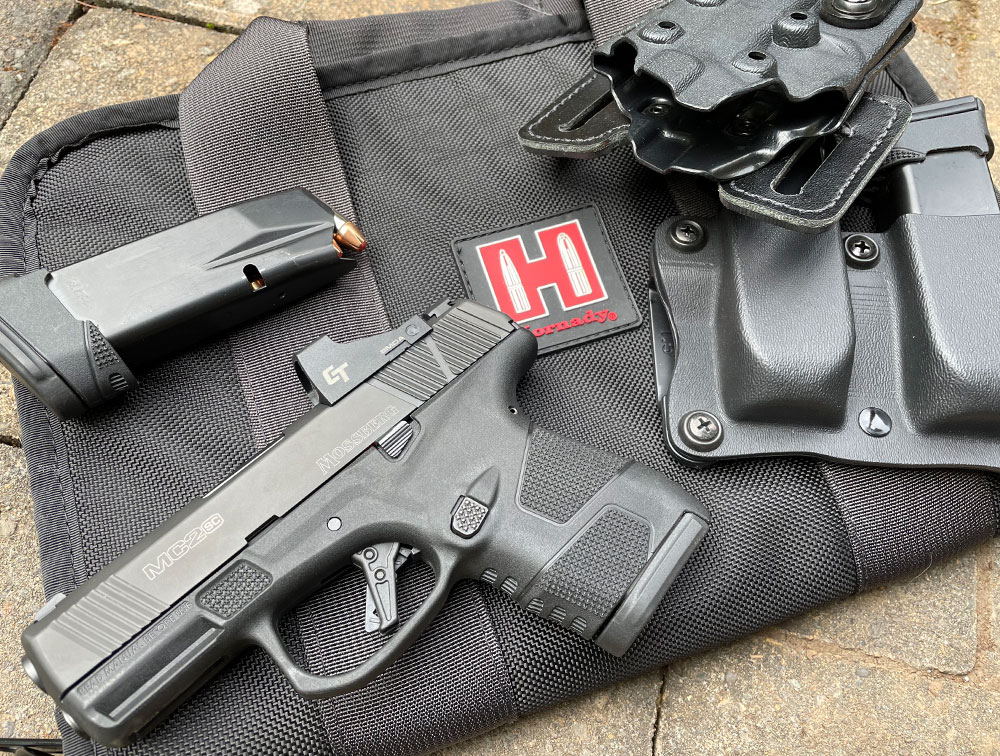 9mm micro-compact pistols are the current standard for concealed carry, with vast improvements in capacity, reliability, ergonomics and feature sets across the industry. Competition from top brands is always a good thing for the end-user, and we've seen quality micro-compacts released - and/or improved upon - by Springfield Armory, SIG SAUER, Smith & Wesson and others in the last year.

Now we are adding another big name to that list with Mossberg and the MC2sc. We know that the Mossberg name is synonymous with shotguns, and for good reason. We also know that they make fine bolt action and semi-auto centerfire rifles, and you are likely already aware of their quality pistols including the well-received MC1c and MC2c 9mm pistols. The brand is now stepping into the fast-moving micro-compact realm and they are checking all the right boxes with the MC2sc.

There are a few must-haves when it comes to features for a micro-compact defensive 9mm pistol in 2021. It needs to provide maximum capacity, be optics-ready, and offer excellent ergonomics. Beyond those basics, the modern shooter demands a good trigger, an accessory rail, and it must prove to be reliable. The MC2sc has accomplished all of these things in my book.

Mossberg recently brought a group of firearm industry media types to the greatest place on earth (bias alert!)...Gunsite Academy...for a writers event. There was no advance information as to which products we would be checking out.* On the tables in front of us were small boxes with a Mossberg logo, a DeSantis holster & mag pouch kit, and misc. gear from Mossberg and Hornady, (the latter graciously provided all pistol ammunition for the duration of the event).

As the boxes were opened, a room full of professionals - used to being "first to hear and see" all the latest and greatest products in the firearms industry began to generate a low buzz. The provided MC2sc pistols were outfitted with Crimson Trace CTS-1500 red dot sights, and the group began checking out the pistol, commenting to each other on features, and taking notes. The Mossberg team and Gunsite CEO Ken Campbell addressed the group, got us up-to-speed on the product and Gunsite standards, we set up our holsters and headed to the range.

Gunsite Rangemaster Lew Gosnell and Instructors Aimee Grant and Steve Tarani assembled and briefed us on the range, and before long we are running Gunsite drills with the MC2sc. Some chose to carry the pistol IWB with the provided DeSantis holsters, while others - like myself - set up the holster OWB.

The sentiment that began to surface among the group was somewhat unique to me. It was one of basic satisfaction. There were not many "wow's", nor were there many disparaging remarks. In fact, I can't remember hearing any complaints on the range. What's more important is that I didn't see - or experience - any issues or malfunctions. Thanks to Hornady, everyone was running Critical Duty 9mm +P. The lack of "wow's" may sound negative, but it isn't. All of these factors say good things about the MC2sc. It checks the right feature boxes, shoots comfortably, and flat-out performs like a quality defensive pistol should.

Back to the boxes

Mossberg has entered the high-capacity double-stack micro-compact market with good capacity numbers. 11 round "flush" mags, and 14 round extended mags are standard, with 10/10 options available for those in states with Counter-Constitutional mag capacity laws.

From Mossberg: The MC2sc optics-ready slide easily facilitates the co-witness mounting of common Micro Dot optics— including JPoint and Shield footprints, among others.

The provided MC2sc pistols provided by Mossberg for the Gunsite event were pre-installed (and zeroed) with a Crimson Trace CTS-1500 red dot sight, which performed well. I can confirm the JPoint/Shield footprint and experienced an easy install of a Shield optic on the MC2sc.

From Mossberg: Frame are high-tensile strength glass-reinforced polymer that feature Mossberg’s signature aggressive grip texturing and palm swell for a confident, firm grip under a variety of shooting conditions.

I found the MC2sc to be a very comfortable pistol to shoot and manipulate. This is always a very personal preference from person-to-person, but the texturing is very Goldilocks "just right" for concealment and operation, and I found the gun to feel very natural in my hands. I also greatly appreciated the forward index-points found on either side of the frame. Those with smaller hands seem to also find the MC2sc comfortable.

From Mossberg: The flat-profile MC2sc Trigger (approx. 5.5 lbs. pull) has an integrated blade safety, a short, tactile reset and reduced overtravel. It features a crisp, clean break and smooth take-up. All MC2sc models have a reversible magazine release behind the trigger guard. A manual cross-bolt safety is available as an option.

No complaints with this trigger when it comes to operation. The flat profile enhances shootability, and the short reset allowed quick follow-up shots. If I could cite one complaint with the trigger, it would be the "hot spot" it created on the bottom of my index finger where the lower lip of the trigger blade and the bottom of the triggerguard caused a small blister. Obviously this is a more individual issue based on me - but several other shooters reported a similar issue. However, this is also keeping in mind hundreds of rounds of +P ammunition in a series of Gunsite drills.

The Mossberg Team informed us that the MC2sc would be compatible with a variety of SIG P365-specific rail-attached lights and other products. I can confirm that the SureFire XSC fits well. As with all new pistols, it is now an impatient waiting game for optics-ready holsters and the rest of the aftermarket to catch up - but we know it inevitably will.

From Mossberg: Mossberg’s revolutionary STS™ (Safe Takedown System). The user unloads the firearm (removing the magazine, and clearing and locking the action open), and then removes the striker assembly prior to removing the slide as instructed. Unlike competitive products, an MC2sc user is not required to pull the trigger in order to disassemble the handgun for routine cleaning and maintenance.

This is an interesting feature that is well thought-out and should prove very popular in the marketplace.

As mentioned above, I did not see or hear other shooters experiencing issues with the MC2sc. Honestly, I didn't hear many issues with the Crimson Trace red dot sight. Personally, after hundreds rounds of Hornady +P 9mm at Gunsite Academy, followed by nearly 1000 rounds since (multiple manufacturers, grain weights and bullet types), I have not experienced a SINGLE malfunction. This goes for Mossberg's magazines as well. I can only speak for one gun and one shooter - but the MC2sc has earned my trust.

The design simply makes sense. The pistol simply runs, and it provides all of the features that a gun in its class should. If you're in the market for a micro-compact 9mm for defensive use, the Mossberg MC2sc deserves to be on your short list. ~ GK

Thanks to Mossberg for an exceptional event, Gunsite Academy for the use of their legendary facility and world-class instructors, and Hornady for their generous supply of ammunition.

*Mossberg also unveiled the 590S Series at this event.