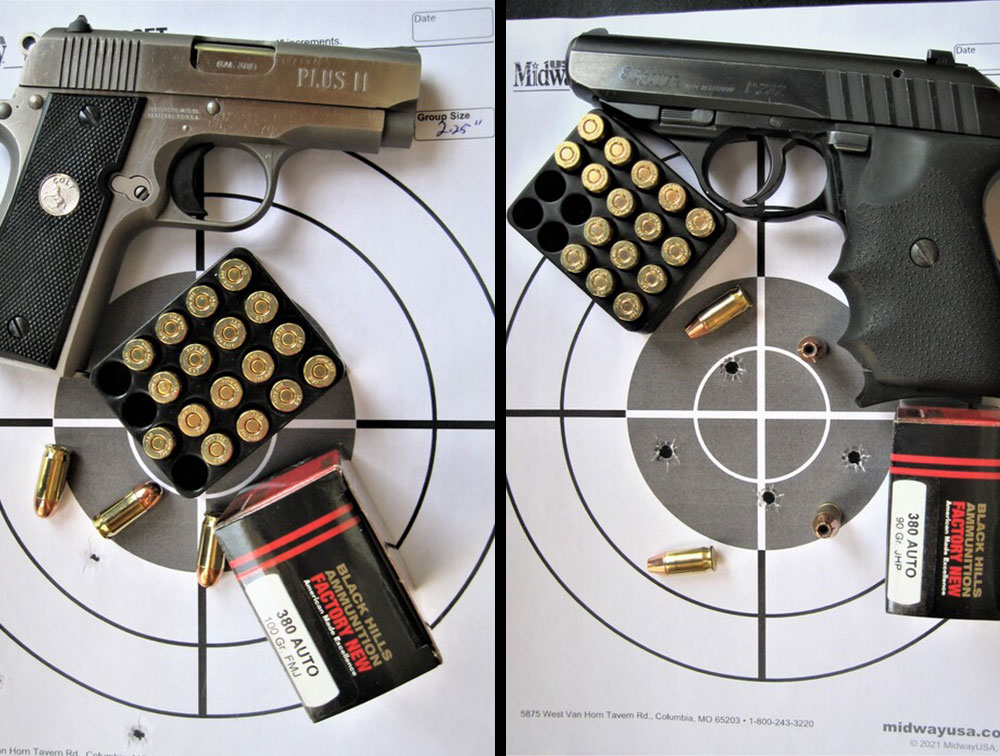 While I rarely carry a .380 ACP, I had a wonderful opportunity to run two loadings of Black Hills New Pistol Ammunition through two small pistols and enjoyed the experience.

The 30-year-old company’s production facility is in Rapid City, SD, and offers rifle and handgun ammo in a variety of loadings. Owners Jeff and Kristi Hoffman have a small staff, but quality dominates. The website notes that "every round of ammunition leaving the factory is hand inspected by our quality control staff.”

Black Hills sells through vendors and does have military and law-enforcement contracts. Take a look at the website for more information.

I usually carry Winchester 85-grain Silvertips in the two pistols. Black Hills gave me an opportunity to consider alternatives.

At the range, I marked a 21–foot distance and used a standard Midway USA pistol target. With each pistol, I first fired three rounds of CCI Blazer 95-grain FMJ before switching to the Black Hills rounds.

I shot two-handed from a makeshift rest with five rounds for each pistol and for each bullet type to allow for a flyer, using separate targets. There were no feeding or extraction problems. Even with the minimal pistol weight, recoil was quite tolerable. As with any handgun, the operator is the key to success, but quality ammo sure helps.

I repeated each ammo test for verification, using different boxes of each ammo test. Results above are for the best shot groupings.

I first shot the 100-grain rounds. In the Colt, a four-round group measured 2.25 inches with two shots almost touching. Rounds placed low and to the left on the target. With the Sig, the group opened to about 3 inches, but I had two small groupings of one inch or less that were slightly low and to the right.

Next, I moved to the 90-grain JHP, which I hoped would be a strong defensive round. The Colt placed four rounds in a straight line measuring 2.5 inches slightly low. With the Sig, distance was 1.75 inches with four rounds near point of aim. With each test, I had one flyer, and that simply is human error.

I could feel the JHP increased recoil slightly, but that kind of performance with this loading convinced me loading the 90-grain round in either pistol would be a viable carry option.

The .380 rounds are in black plastic holders in cardboard boxes of 20. A bit of pricing research from one vendor showed the 90-grain JHP rounds at $19.99 per box, and the 100-grain FMJs at $17.99. Do check around for pricing, particularly if you can order for home delivery. In today’s .380 ammo market, these are attractive prices.

Running the Black Hills JHP ammo through my .380s assured me each pistol, tucked in my Bianchi Black Widow holster, would be yet another way to Stay safe, be prepared. ~ Mike

Mike now calls Northwestern Arkansas home but has lived and worked in several states and internationally. He has been an independent contractor and consultant since 2006 specializing in risk management, emergency management and training. In addition to work as a law-enforcement planner and technical writer with the Boise, Idaho, Police Department, he has experience in journalism, crop and animal agriculture, dryland farming for 20 years in western Kansas, plant and animal diseases, pandemic influenza, agroterrorism, bioterrorism, food safety and healthcare marketing.