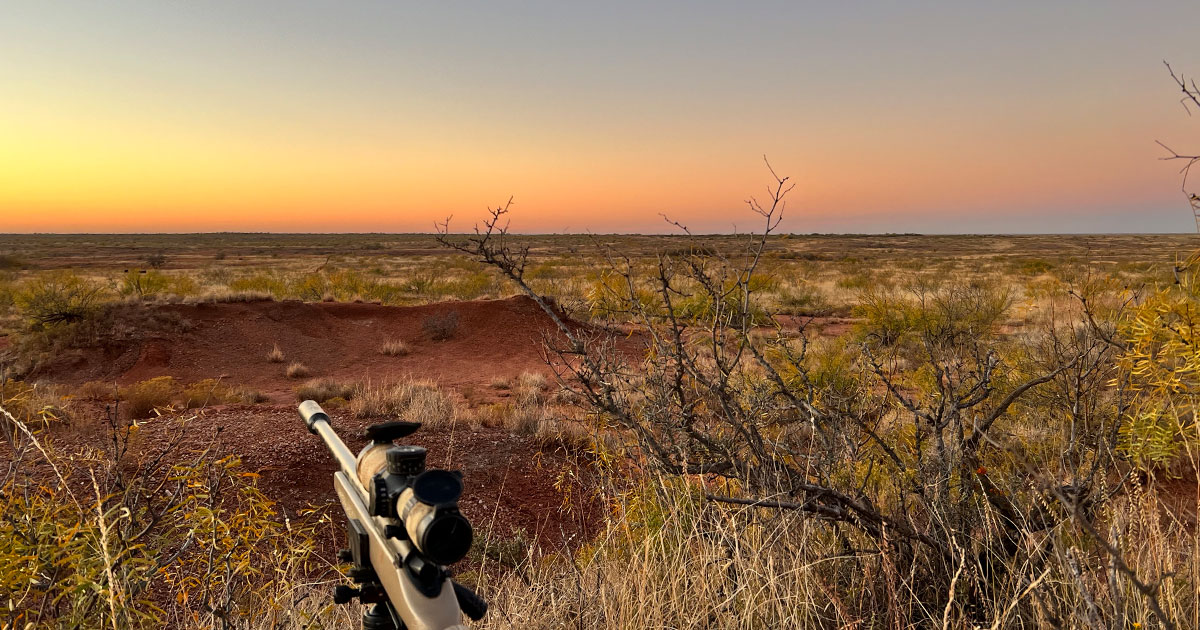 Our footfalls creased the early morning air. I led while the two youngsters followed, anticipating my every move. We were on the hunt for any whitetail that snuck through the mesquite. As sunrise broke over the frost-crusted CRP of our family's land, the youngest broke the shot. The buck immediately fell where he stood. Thank the Lord for good glass, socks, and shaky rest.

Our eyes play tricks on us. How often have you sat in a tree and convinced yourself that the bush, tree, or branches were the next entry into the Boone & Crockett Club? The glass we carry to the field is our direct link to the animals we pursue. It doesn't pay to skimp on essential gear, especially the glass. That goes for your spotters, binos, and scopes. That's the lesson my father passed to me, and I'm doing my best to bestow it upon my boys.

I've been shooting a Leupold Mark 5HD 3.6-18X44 with the TMR reticle for a few years now. That's a bunch of optic for a hunting rifle, but I love the reticle, and it's super clear. I never had an issue until my sons began hunting, and they've grown to love the optic just as much. It has as many features as a Formula One engine, and the reticle is simple to understand when put into practice. That's the thing about quality optics. The best ones often look intimidating, but they're simple and easy to use on the inside. There are ways to simplify the process even more. If you dislike dialing in MILs or MOAs, you can utilize Leupold’s Custom Dial System.

The open areas we hunt in are wide open with very little undulation in terrain. Our shots can range from 20 yards and well beyond. I'm comfortable out to 500 yards in the open, but with limited practice, that number shortens yearly. The CDS system makes it easier to remain comfortable. When you start calculating distances and all the involved ballistics, confusion rears its ugly head. If you don't perform these tasks frequently, you begin questioning yourself and your abilities. With the CDS system, even an eight-year-old can understand the dialing system.

Leupold calculates the ballistics for you, which is nice because your dials are tuned to your specific load and the environmentals of your area. This allows the shooter to order custom dials if traveling to higher altitudes or drastically different climates. Each dial has its description etched on top of the turret, making it easy for shooters to distinguish their intended use.

I have my boy's dry fire practice every night a few months before the hunt. Before they begin, each recites the Four Rules of Gun Safety:

2.    Do Not point the muzzle at anything you are not willing to destroy.

3.     Do Not put your finger on the trigger until your sights are on the target and you are eager to shoot.

With the dry fire practice, the boys utilize the tripod, gun, optic, and everything they use in the field. I aim to simulate the scenario as closely as possible to ensure success. I print out deer standing in various positions and have them aim at the ideal shot location. I also have them study the FTW Training manual on shot placement. I strive to take out the guesswork and unknowns of the equation. I can't see what they see in the scope, so I can't make the call on when to shoot. That all rests on their small shoulders.

With all the preparations we take to be successful, I question my adulting sometimes. Kids have a funny way of making you doubt your parenting skills. I sat in the blind on a freezing morning, wondering if they would be able to sit long enough to hunt the morning. It was a balmy 27 degrees that morning. They were bundled up so well that I believed I had this cold thing licked. That was until the buck poked his frosty nose out of the mesquites.

My youngest was on the gun first, and I forgot a few details during dry fire practice. I can't replicate the excitement of a young boy's first deer and the excitement of being there in the moment while he was on my lap taking the shot. It wasn't the big buck of the woods, but I shook like he was a giant. On the other hand, the boy was steady and well-versed in what needed to happen.

He peered through the Mark 5HD while I asked if he was on the deer and seeing it clearly. He whispered, "I got it." Instead of taking his word, I began to raise the rangefinder to mark his distance. I knew it couldn't have been more than 150 yards, but I wanted to double-check. Before I could even crest the chest pocket, the shot broke, and the buck fell in his tracks.

That was the most challenging shot at making if you think about how it played out. He sat in freezing cold weather on his dad's lap, who was shaking like a leaf. The only consistent thing was the press of the trigger and a clear view. Thank goodness for good glass. I was blown away by his composure and skill with the gun.

The other detail that impressed me was his toughness. He took his boots off as we sat there, cleaning up his deer and beginning the haul-out. He calmly walked to the tent and exited, carrying a pair of socks. He exclaimed, "I'm excited about the deer but more excited than I have socks!" My parenting skills took a long break to double-check to see if he put on socks. If you can't tell, I'm jamming the palm of my hand into my forehead. Thank you, Lord, for good socks!

Sitting back, I couldn't tell a better first-deer story, and for that, I am thankful that it took place on a shaky lap. ~ KJ

Kevin Jarnagin (KJ) hails from Oklahoma but quickly established Louisiana roots after joining the Gun Talk team. KJ grew up as a big game hunter and finds himself in a different venture often. Whether it's making his way to British Columbia for elk or training with pistols, KJ always seems to find a gun in his hands and adventure on his mind.