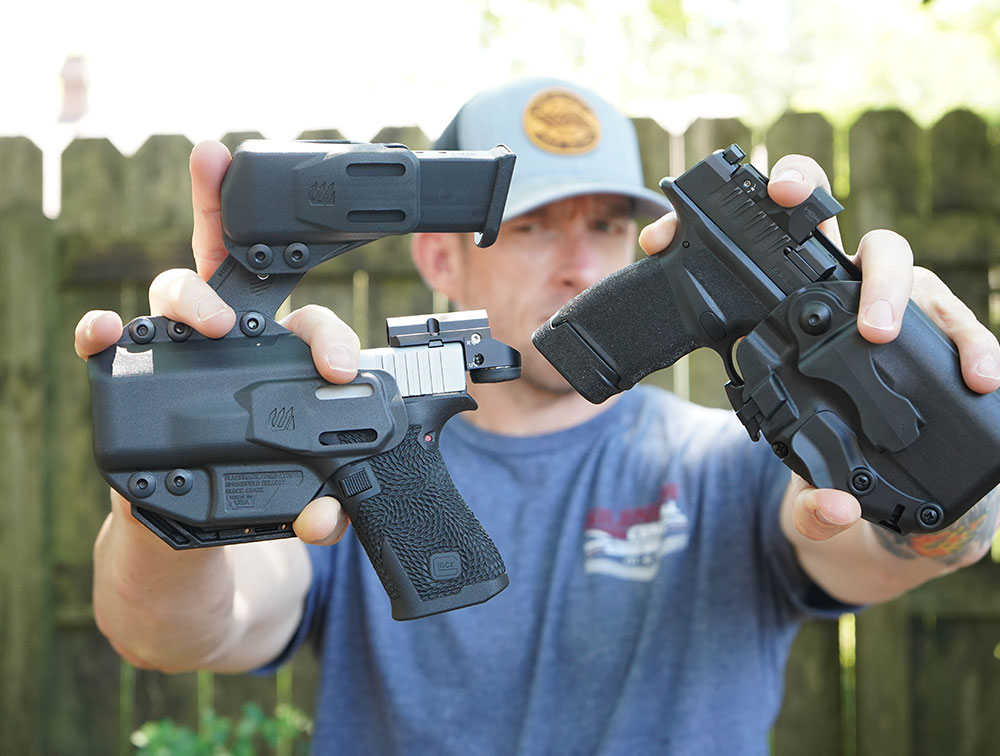 We are in the glory days of gun ownership. New gun owners entering the market have more gear and gadgets available to them than ever before. The issue begins when attempting to navigate the landscape of red dots, holsters, guns, belts, and other essentials. It does seem like the attack against gun ownership is in full swing, but that hasn’t stopped the firearms industry from pumping out exciting, new goodies.

When I first identify and purchase a firearm, I have to decide what it’s going to be used for. For a self-defense handgun, I look at red dots and holsters. I am assuming I already have ammo for the gun. Here are a couple options to get new gun owners started.

We’ve shot the Holosun red dots quite a bit lately. I’ve enjoyed the Holosun 509T more than expected. It is a larger red dot, which I love. For me, I pick up the dot super quick. It also helps that it has a battery life that pushes 50K hours and has a solar power failsafe. One thing to watch out for is the weight of the optic. Some of the slides won’t run with heavier optics. The GLOCK G19 runs just fine with the 509T.

This is a new optic, which is available for pre-order HERE. This well-built light is rugged and robust in all the right places. The glass is recessed to prevent breakage if dropped, and the battery life is roughly 65K hours. You can also purchase the Hex Wasp on the Hellcat if you want to buy the entire package. If you are lucky enough to find the Hellcat RDP it should be considered a major player in your final decision. We’ve been running the tar out of these guns without fail. The Hex Wasp has also stood up to the test.

I’m running the Sig Sauer Romeo1 Pro on my concealed carry gun currently. Why would I select the Romeo1 Pro? I’ve seen how they’ve been produced here in the United States, and I’ve seen what type of torture tests Sig Sauer puts their optics through. They are brutal and unforgiving. Aside from all the above, I genuinely appreciate the build and ease of use. I’d highly recommend giving this one a look as well.

Holsters is a slippery slope. Here in the office, we have a constant debate on appendix carry. I am a huge fan of Appendix Inside the Waistband (AIWB). Ryan doesn’t enjoy it and is ready to voice his concerns. I understand and appreciate his views. However, I’ve been carrying AIWB for quite some time and have grown comfortable carrying this way. So, I am going to guide you to a few holsters you want to check out.

On a serious note, please practice and seek training on however you plan on carrying.

Like many of my holsters, this is a new one for me. I love the construction and retention of the Safariland 575 IWB GLS Pro Fit. I also enjoy the fact that this is a multi-fit holster. My particular model fits my G43X and Hellcat. However, don’t plan on carrying a light because this model doesn’t come with an option for lighted firearm. The retention release is in an easily accessible and deployable location. Whether your right-handed or left-handed, the release button is indexed by your middle finger. The trigger finger is nowhere near the trigger when engaged. If you want to carry a few different guns, the Safariland 575 might be the ticket.

I’ve written about this holster in the past. There’s a good reason too. I love the slimline of the Stache with magazine carrier. It’s the all-in-one package with little fuss. The Blackhawk Stache is rugged and comes available for a wide range of firearms. My G43X found its forever home in the Stache early on and has never left. The adjustability is phenomenal and easily done with a small Phillips head screwdriver.

We the People Holsters IWB

Simple and to the point. That’s how I like most of the gear I run. We the People IWB Holsters are well-built and fully adjustable. The IWB holsters are also available in several different designs. I maintain a simple, yet functional stance and these IWB holsters fit that bill.

If you are new to gun ownership, welcome! We are happy to have you hear. For those of us that have been here a while it is our job to guide and mentor. There’s plenty of information out there, but why don’t we guide them to the right gear? These are the Glory Days of gear, and no better time to enter the gun world. Choose wisely. ~ KJ