Gear Failure is NOT an Option 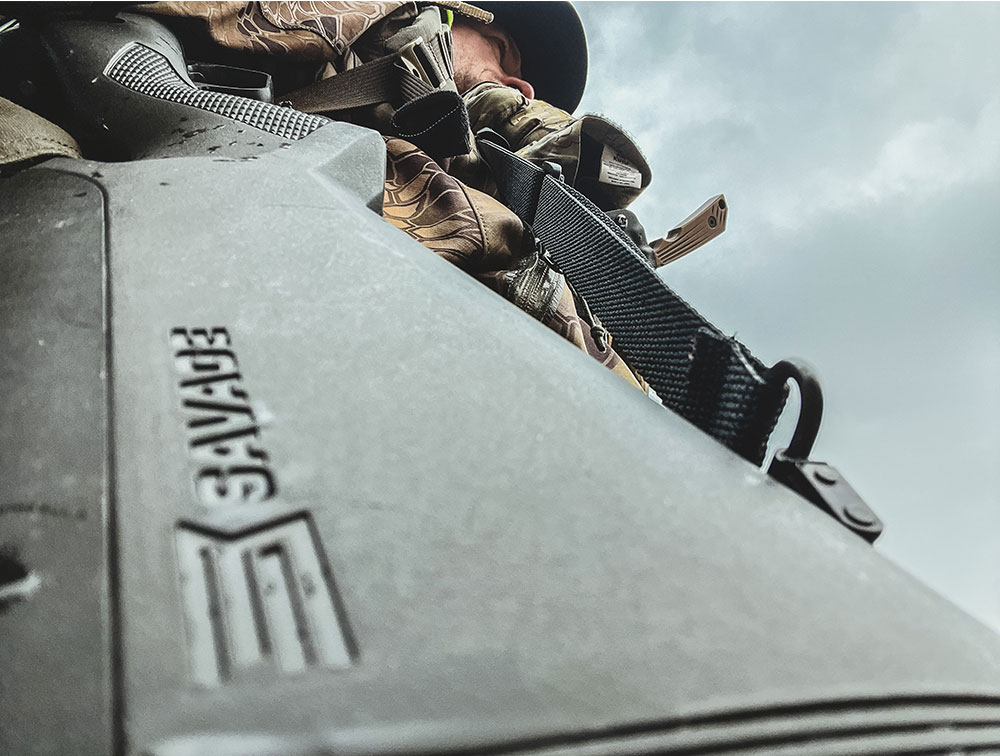 Everything they say about Kodiak, Alaska, is true. The weather turns on a dime, and misery ensues if you take subpar gear.

On a recent blacktail hunt, I experienced some gear that defines toughness.

Chambered in .270 Win., the 110 UL carries easily across the tussocks and through the alders that blanket the island. The gun weighs in at 5.85 pounds, which isn’t immediately noticeable until you’re totting out an 85-pound pack.

The gun is a shooter. I gained confidence in the gun when I took it to a recent long-range shooting course. Aside from weight and accuracy, one thing that stood out was the toughness against harsh climates. I had a couple spots that began to show signs of rust, but the crew of hunters was constantly under barrage from rain and salt spray off the ocean. It took a little CLP and TLC in the second evening to thwart further harm.

The XD-m Elite is known as being a hammer on the range. I didn’t get within shooting distance of any deer for the ever-competent 10mm, and I never drew the firearm. However, I was happy to have this one on my thigh.

Walking through brown bear country is no joke, and it would help if you remained bear-aware and always be at the ready. The 10mm handles the most cantankerous creatures that walk this world but having 15+1 rounds of 10mm puts the mind at ease. This is a gun that I never want to draw because if it comes out of the holster, something goes terribly wrong. The gun's weight was negligible, and I never paused to think about how it kept snagging on alders or devil's club. If I were to pick another self/bear defense again, I would make the same call.

I'm at the point in my hunting career where I refuse to hunt without a suppressor. Silencer Central removed the barrier to entry with its seamless transition from start to finish. Unfortunately, the suppressor utilized in the hunt has yet to be released, so I can't say much. I will tell you this. If you hunt, this is your next suppressor purchase.

I never paid much attention to my feet when I was younger. I typically found myself hunting in a deer blind or on a field edge, and there wasn't a ton of walking needed to get the job done. As I've grown as a hunter, I realize your feet are what carry you out. You can get by with a good pair of boots, but the Sheep Feet insoles I purchased were lifesavers. We side-hilled every mountainside, many times multiple times a day, and those custom insoles kept my feet in a strong position.

Again, another product I can't say much about, but the Burris optic I used delivers clarity, function, and ruggedness, and it's easy to use. It has everything you expect from a new-age scope. This will be covered in an upcoming new products piece later in the year.

The 10x42 Signature HD binos used were great for finding blacktails on mountainsides, but if I were headed back out, I'd suggest something more in line with a 12x50 range bino. I found that I could locate deer quickly but identifying the animal's size was challenging. This would have been the case with any 10x42 binoculars.

The weight of the binos was negligible, carrying them around the island. One thing I did notice was the grip texture surrounding the glass. It's a rubberized material makes it easy to grasp in the rain, which always rains on Kodiak.

The quality of glass you use on a hunt, especially out west, is crucial. We spent hours on glass staring at mountainsides, and I never once got eye fatigue, and that is a testament, given the number of hours we spent glassing.

Another thought-provoking element to the hunting kit is ammo. The shots on most animals were over 230 yards. Remington Core-Lokt Tipped is designed to perform at longer ranges, but what happens to close-range shots. Whatever bullet I use better perform at close range and beyond because you never know how the hunt plays out.

The deer I encountered was at 120 yards. I didn't want to track deer on Kodiak Island. The thought of sneaking through alder patches on a brown bear-infested island appeals more to me than a peanut butter and mustard sandwich. In these instances, I prefer high-shoulder shots, precisely where the bullet impacted. The giant-bodied deer collapsed where he stood.

This is the fourth animal I've taken with Core-Lokt Tipped, and I have seen the same results on each critter. They expire quickly and not far from where the shot broke. From the examination of the wound cavity, it was a clean entry and just a mess from that point forward.

Once-in-a-lifetime hunts demand two things: preparation and good gear. Thank goodness for great gear because I've been on the losing end for a time or two. We travel to hunt in beautiful places and chase unbelievable creatures too often to scrimp on gear or preparedness. I must be clear about something that happened on Kodiak, and I missed a deer.

On the final day, we glass him up this spine where we couldn't get closer. He was bedded with a doe and a younger buck at 465 yards. I'd spent a couple days preparing at a long-range shooting course, so I was comfortable at those distances. We did everything we could to stalk closer but could only close the distance to 430 yards. I waited for a solid opportunity to close the deal, and he hand-delivered the moment. I blew the shot. It eats me up, but I'd retake the shot if given a chance. I just wouldn't have left my Kestrel back on the boat. I learned, once again, that being prepared doesn't only happen before the hunt. You must be prepared each day of your adventure. ~ KJ