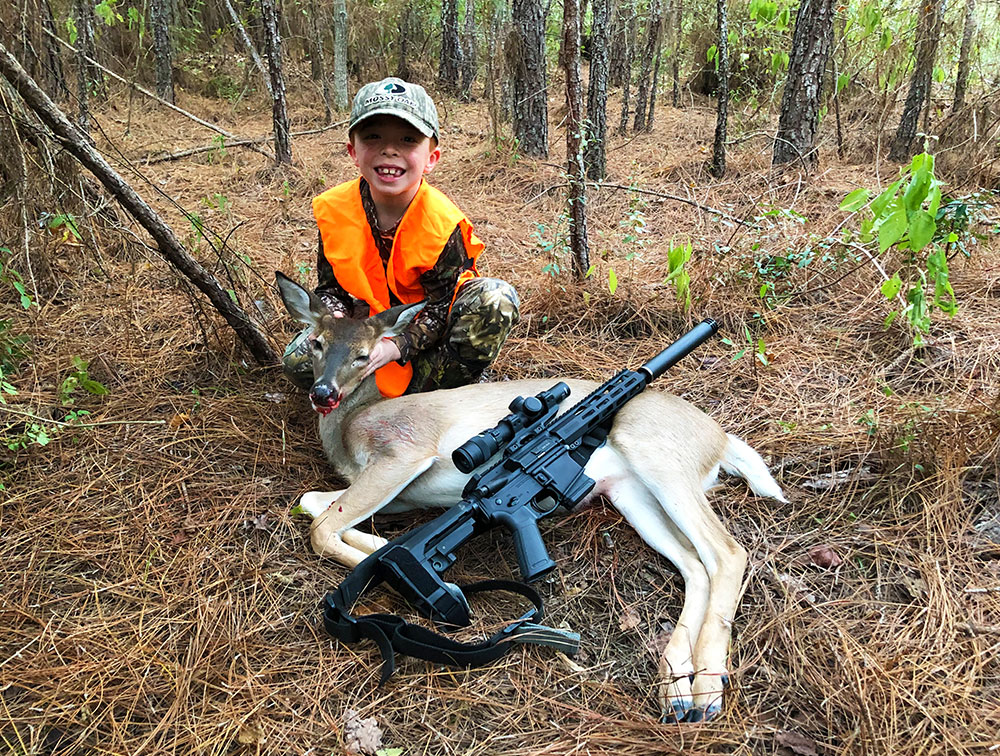 One of my most treasured memories in life took place in Big Wells, Texas when I was eleven years old. That memory happens to be of the day that I harvested my first whitetail deer. The memory is special for a couple of reasons. The first is obvious. It was my first whitetail! The second is actually quite a bit more meaningful to me, though. I was hunting with my best friend, my father.

That memory became even more impactful to me on a recent hunting trip. My son, Douglas, and I headed out to Oakdale, Louisiana for the opening weekend of the youth whitetail season with my father-in-law, Dave McGee. Douglas had been anticipating this hunt for several months, and he was really excited to get to the camp. The opportunity to have a chance to kill his first deer after two years of trying and striking out was something that he was really looking forward to.

We arrived in the afternoon on Friday, October 11th. The first cool weather of the year had just hit that day, and the weather for the weekend was supposed to be phenomenal with clear skies and highs in the low seventies. We quickly unpacked our gear and headed to an area where Douglas could shoot his rifle to make sure everything was still intact after the drive over. Just as I thought, Douglas and his gun were both just where they needed to be. After a fantastic dinner and fellowship with family, we headed to bed with big anticipation for the next morning.

We awoke the next morning to cool temperatures in the low fifties, which was a welcome surprise for mid-October in Louisiana. As we headed to the stand, Douglas could hardly contain himself. The morning was beautiful, and we made ourselves comfortable in the spacious box stand. We watched several squirrels jump from one pine tree to the next as a multitude of doves flew in to feed around our stand, but much to our dismay after a three-hour sit that morning, we did not see any deer.

After getting back to camp, eating lunch, and playing a little football with his cousin, Ryan, Douglas was eager to get back in the stand for the afternoon hunt. I was pretty hopeful that the afternoon hunt would be more productive than the morning hunt. After holding Douglas back for most of the afternoon, we decided to head to our stand for the final three hours of daylight.

As we settled into the stand for the afternoon, Douglas’s excitement level was high once again. The first couple hours of our sit were uneventful. We passed the time by snacking on beef jerky and enjoying the birds and other wildlife as they went about their normal afternoon routine. With about an hour left of light, I caught movement at the end of the shooting lane I was watching. It was a deer! I slowly turned to Douglas and whispered, “There’s a deer on this side.” Douglas’s head quickly turned away from the lane he was watching. I slowly stood up and helped Douglas move his chair into position for a shot. I could feel his heart beating as he nervously asked me, “Dad, is it in range?” I picked up my binoculars and ranged the deer at eighty-one yards. “Yep. It’s right around the distance we’ve been practicing, but let’s wait and let it get perfectly broadside before you try to take a shot.” We watched the deer feed for what seemed like thirty minutes. In reality, it was only about ten minutes, but I wanted Douglas to have an absolutely perfect shot. I tried to calm him down as he watched the deer through his scope and reminded him of all the things we had been practicing on the range. When the deer finally made its way into the right position, I quietly told him, “When you’re ready, squeeze the trigger.” I watched Douglas’s finger as he slowly squeezed the trigger. “Bang,” sounded the rifle. The deer jumped straight up in the air and kicked as it ran quickly back where it came from. “You got it!” I exclaimed to Douglas.

After the shot, we shared a moment that was unexplainable. It was a special moment of excitement that I’ll never forget. I fought off Douglas’s urge to go and look for the deer as long as possible, but after twenty minutes of nagging, I agreed to walk down to where the deer was standing and look for blood. As we arrived at the spot, I could not find a single drop of blood. Douglas’s mind began to spin with thoughts that maybe he had missed. I made my way over to the last spot that I had seen the deer before it ran into the brush. As I checked the area for blood, I caught a glimpse of white ten yards into the pine thicket. “Douglas, come check this out,” I yelled toward Douglas. The moment Douglas realized the deer was laying ten yards from us, he let out a scream that I’m sure everyone within a 500-yard circle heard.

The deer was only a small button buck, but it would not have been any more special if it would have been a giant ten-point. As I fought back tears of happiness, my mind went back to Big Wells, Texas some twenty-seven years earlier and the moment I walked up on my first deer with my father. I had come full circle.

My dad is no longer with us, but I’m hopeful that he is up in Heaven with a proud smile on his face. The memories I made with him in the field are some of my most precious memories, and I hope that I can provide Douglas with some of those same special memories over time. I’m thankful that we were able to share this moment with my father-in-law and that Douglas will forever have this memory to look back on as the beginning of many years of whitetail hunting ahead. ~ Brett

Brett is a lifelong hunter and shooter from southern Louisiana. He is the Vice President of Sales and Purchasing for Lipsey’s, a national wholesale firearms and shooting sports distributor. He and his wife, Kate, are the proud parents of three children, Douglas, Lizzy, and Anna Jane. His passion in life is spending time with his family and being outdoors chasing game.