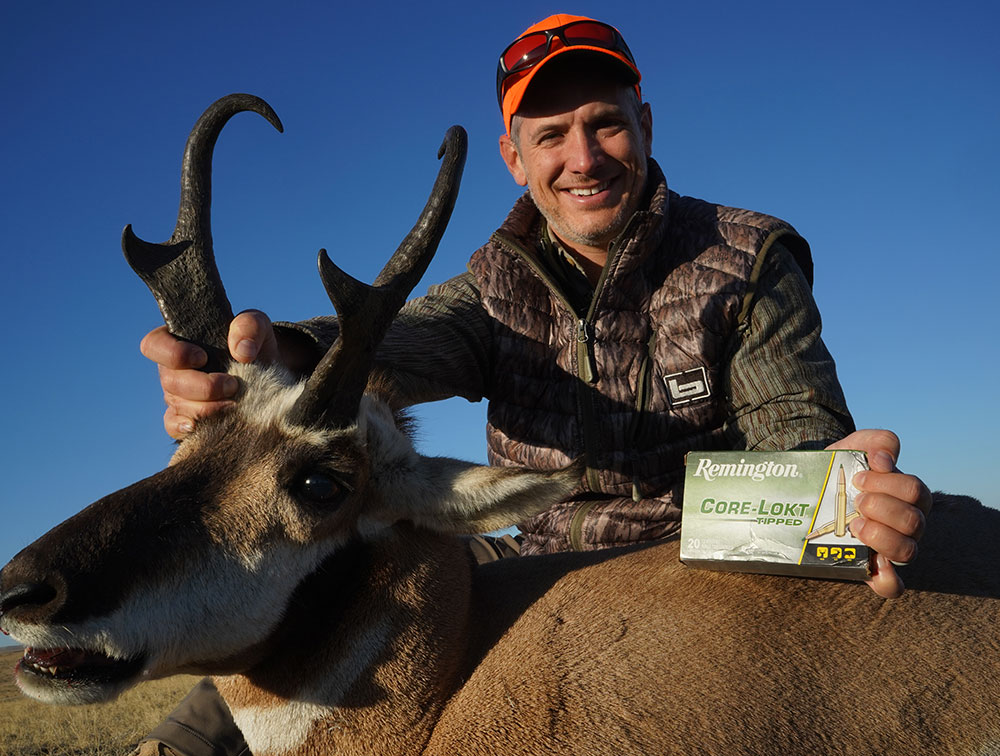 These days, it's challenging to distinguish hunting bullets, but that doesn't stop big-time manufacturers from chasing a better way of doing things. I've always been big on Remington's traditional Core-Lokt bullets, but now it seems there is a new, deadlier mushroom in the woods.

Remington Core-Lokt Tipped is outfitted with a big green polymer tip, which improves long-range ballistics, stability, and performance upon impact.

For Western, big-game hunting hunters deal with wind, lots of wind. A bullet that withstands wind gusts and maintains stability significantly impacts the shot. For me, and the hunting I do in Oklahoma, wind kills or rescues a hunt. There have been several instances where I've called myself off difficult shots because my wind calls weren't consistent. This was ages ago when bullets weren't what they are today. I’d likely still call myself off but having a bullet you trust to buck the wind is key to high winds.

The first antelope, on record, with Core-Lokt Tipped was a 266-yard shot from a .270 Win. I only know this because I called range for Ryan Gresham. Would the traditional Core-Lokt ammo do the job on a shot like that? You bet it would. I also firmly believe a long shot is all in your perspective. Is 266 yards a long shot for the hunter that regularly practices out to 700 yards? Not quite. But, for the hunter that only shoots out to 100 yards, the 266 yards might as well be five hundred. It’s a stretch.

Ryan eased into position and set up for the shot. Once the shot broke, a follow-up shot was void. The antelope collapsed immediately. Upon further inspection, the antelope quartered toward Ryan slightly, causing the deadliest mushroom to pass from the front side shoulder and through the opposite shoulder. We never recovered the bullet, but the damage caused was evident.

The intent behind Core-Lokt Tipped is the performance at longer ranges. I sat down and spoke with Joel Hodgdon of Remington Ammunition about the development of Core-Lokt Tipped, and he delivered a few answers that you'll want to know.

How long has Remington been working on Core-Lokt Tipped?

What was missing that prompted Remington to dive into a new bullet on a traditional design?

Remington wanted to take classic Core-Lokt just a little bit further! For such a historic round, Core-Lokt is accurate. Still, we knew that a modern, polymer-tipped projectile would be more accurate and give hunters a better ballistic coefficient than the original version. The question was, how do we make Core-Lokt even better? The answer, make Core-Lokt more accurate at longer ranges.

If you have Core-Lokt, why jump into something new?

The deadliest mushroom in the woods is still the deadliest mushroom in the woods. Remington is loading millions of rounds of classic Core-Lokt for this year’s hunting season. We don’t plan on stopping making Core-Lokt anytime soon. However, we knew that modern bullet technology could make an even more accurate version of an 80+-year-old ammo product, so that's what we set out to do. If we can ever give hunters and shooters better ammo, we will.

What is one thing that goes unnoticed about Core-Lokt Tipped?

What most people don't consider when pursuing game at longer ranges is…terminal performance of their bullet. Core-Lokt Tipped is more accurate and gives better longer-range potential than iconic Core-Lokt, but let’s not forget that once your bullet gets on its target, it still must do the most critical job. Core-Lokt Tipped has the same hard-hitting knockdown power that hunters have come to expect from Core-Lokt for the last 80 years. We didn’t compromise an ounce of terminal performance. If you can get Core-Lokt Tipped on target, the deadliest mushroom is going to expand as expected.

So, what can you expect from the new Remington Core-Lokt Tipped ammunition? A deadly mushroom that exceeds performance and accuracy at longer distances. For those open plains hunters and western big game adventurers, this is big news. It's news that should be spread and shot. ~ KJ