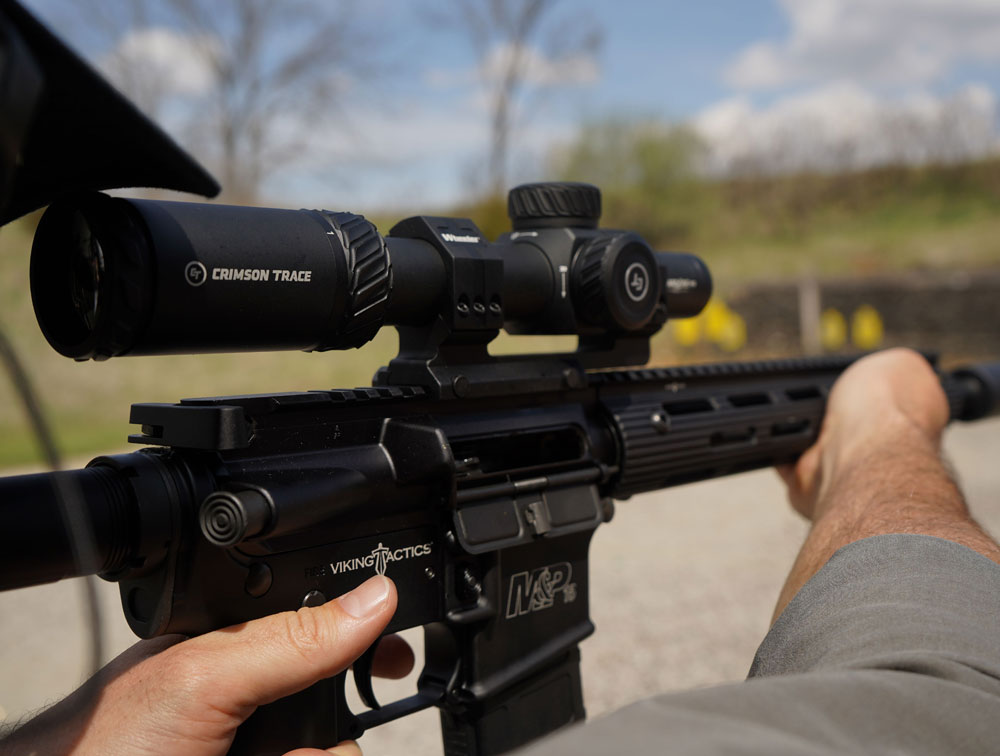 Crimson Trace recently announced that they were launching 50, (that’s FIFTY), new riflescopes. While it is no secret that a brand most known for its laser sights has now become a full-fledged firearm optics company, fifty new offerings is bold, aggressive and well, somewhat brilliant!

One of the benefits that Crimson Trace offers is that they are part of the American Outdoor Brands family of companies. Where this becomes beneficial is that shooters across multiple AOB brands are involved in product testing and product use. Those activities are spread across tactical use, competition use, backcountry hunts and more. This also means that CT optics are used on “media events.” This is important because it means that the product needs to work, and work well.

Gun Talk was recently invited to a media event that AOB held in Columbia, MO that showcased Crimson Trace’s new & upcoming product lines, (as well as Caldwell, Lockdown, Frankford Arsenal, Wheeler, Tipton and Smith & Wesson Accessories). We were shown and had a chance to shoot with several new and exciting products including the upcoming R.A.D. (Rapid Aiming Dot) series, and the onslaught of new riflescope offerings.

Fifty new optics is a lot to try to digest, so let’s break down what we’re looking at here. Two general lines exist within Crimson Trace’s scope category: Hardline and Brushline. Hardline products are designed for tactical and/or professional use, while Brushline products are made for hunters. Within each general line, you’ll find “Pro” offerings as well. The Pro moniker is just like it sounds – enhanced features.

With fifty new offerings, Crimson Trace has attempted, and succeeded at, releasing a riflescope for nearly every type of shooter and doing so at an incredible value.

I mentioned incredible value and this is truly the case with Crimson Trace’s offerings. The features, glass clarity, ruggedness and thoughtful design of CT’s riflescopes are exceptional – especially as it relates to price. Expect to pay as low as $139.99 MSRP for middle magnification Brushline models, but only as high as $899.99 MSRP for high end Hardline Pro 6-24 First-Focal-Plane scopes.

But, Do They Run?

In a word: Yes. While there is only so much that can be accomplished during a media event and when you’re getting first looks at new products – I can attest that the mix of Crimson Trace scopes that we ran, worked excellent. They were used repeatedly for hundreds of rounds across many rifle platforms, and the steel was ringing consistently at multiple distances.

Glass clarity really stood out. Crimson Trace says that all of their scopes have MOC (“maximum optical clarity”) and ELD (“extra low dispersion”) glass. Sounds cool sure, but their optics are definitely clear. Another standout for us was the aggressive knurling that is applied to the magnification rings, turret caps and turrets.

It’s hard to stand out in the magnified optics world these days, with many notable brands offering quality products. It’s even harder to drop 50 new SKUs on the marketplace and to make them stand out. Crimson Trace is so sure that you’ll be impressed and that you’ll come back for more that they are offering an “Unbreakable Lifetime Warranty.” No proof of ownership, no warranty cards, no time limits. Sounds like commitment to me.

Crimson Trace isn’t the new kid on the block with optics anymore. They been in the discussion for riflescopes and red dots for a few years now, with their initial offerings very well received. This evolution is encouraging for all who’ve trusted the brand for their nearly 3 decades with their premium laser sights, and this next step is going to be exciting to watch.

CT was kind enough to ship me a Brushline Pro 2.5-10x42mm with PLEX Reticle and a Hardline Pro 4-16x50mm with MR1-MOA Reticle. Both are mounted and ready for the range. This article will be updated accordingly! ~ GK

P.S. Get 10% Off at CrimsonTrace.com (that’s across the entire site) when you use Code: GUNTALK10 at checkout.