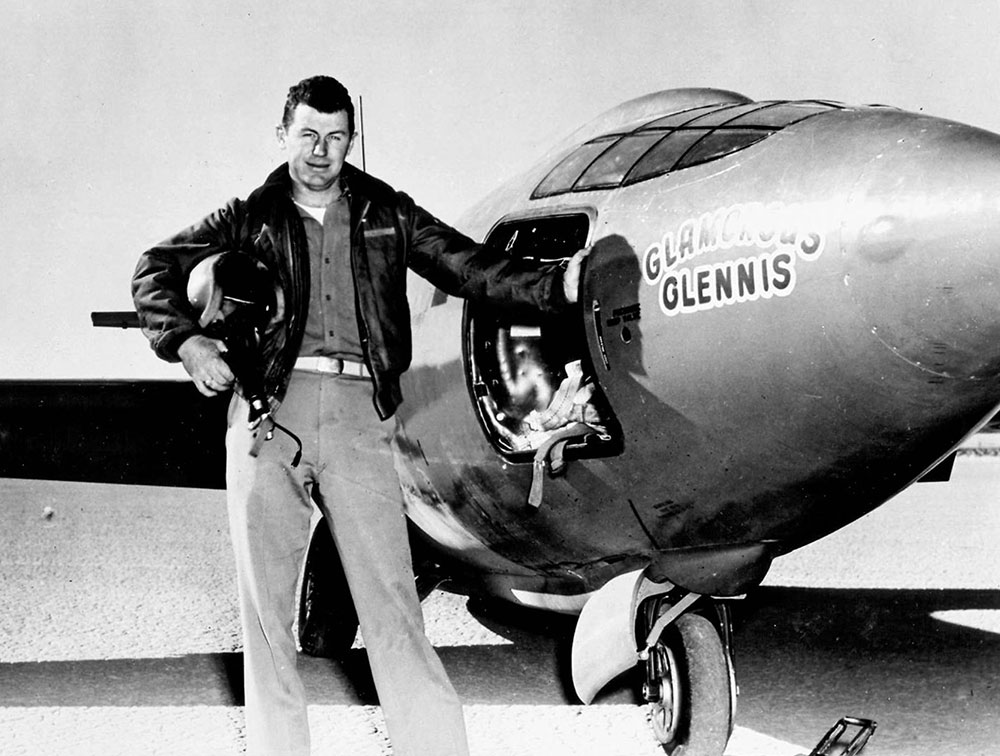 Chuck Yeager and My Embarrassing Moment

We just learned that General Chuck Yeager died on Dec. 7, at the age of 97. Pearl Harbor Day. Somehow that feels like a connection, of sorts.

No one needs to be told who Yeager was or what he did.

Most also know that he was an avid hunter. Two of my friends, Jim Zumbo and Ray Oeltjen, hunted with him many times. I remember a story Ray told me about being in a deer blind with Yeager. Now, understand that Chuck was famous for his eyesight. He said he could see enemy fighter planes minutes before they could see him, and that often made the difference in who succeeded (lived) and who didn't.

(Apologies to Ray if I don't remember this exactly, but I think it's close.) So, Ray and Chuck are in the blind, and it's pitch dark. It's probably a half-hour before any light. Yeager whispers to Ray that there are deer out there. Where? It's pitch dark. Ray stares into the inky morning, seeing nothing, so he challenges his friend, chiding him about his well-known eyesight. Not only are there deer, Yeager said, but there's an eight-point buck out there. Yeah. Sure. It's 20 or 30 minutes later, and Ray (who has good eyesight, and who also used his excellent binoculars) looks out from the blind and sees ... deer! And an eight-point buck!

One of my most embarrassing moments came with General Yeager. I was living in Anchorage, Alaska, and I was a new pilot. I had purchased a plane for the whopping sum of $6,000. It was a 1948 Luscombe 8E -- a two-seat tailwheel plane that didn't have much power, but it would get into the air. The year was 1984, not long after the movie "The Right Stuff" came out, and Chuck Yeager was about as famous as possible.

A friend of mine owned a Cessna 140, another two-seat tailwheel plane that might, on a good day, hit 100 mph, with a tailwind. We flew together around central Alaska, and we joked about being "aces," and copied the West Virginia drawl of Yeager. In fact, we would call each other "Yeager" at times, just as a joke.

So, one morning the phone rings at my home. I answer, and the voice on the other end drawls, "Hey, Tom. This is Chuck Yeager."

Without missing a beat, I gave it right back to my flying buddy. "Hey, Chuck! What's happening?"

You guessed it. It really was THE Chuck Yeager. He knew my father, and when Dad heard that Gen. Yeager was going to Alaska on a hunt, he gave Chuck my phone number and said he should give me a call. Incredibly, he did.

Without missing a beat, I made an ass of myself with my flippant comeback. The rest of the short conversation was a bit awkward as I quickly figured out that 1. It was not my friend, 2. It was the world-famous pilot, and 3. I sounded like a complete idiot to him.

I met Gen. Yeager in passing a couple of times after that at the big fly-in at Oshkosh, WI, but I never reminded him of the conversation (which, I'm sure, he had forgotten).

To this day I blush with embarrassment thinking about how I reacted to my hero. A new pilot getting to talk with an aviation legend.

General Yeager, I know you didn't suffer fools gladly, so thanks for being gracious.