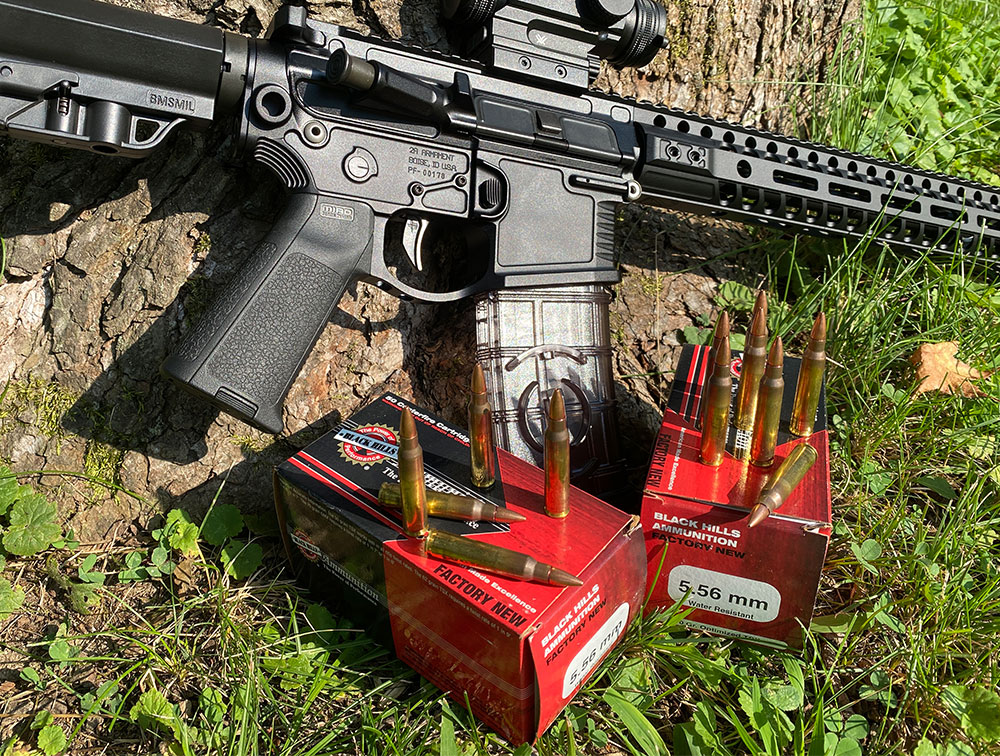 There are many reasons the 5.56mm round is so popular, and it’s not just because the US military made it their standard round for the past six decades, although that is impressive. When the Army adopted the new round in 1963, it was meant for the M16, a rifle made famous by the Vietnam War. The round – renamed the M193 – was lighter than its 7.62mm predecessor, allowing soldiers to carry more rounds for the same weight, critical when humping a loaded pack across the jungle floor. The round also proved highly effective in combat, especially inside 300 yards.

Black Hills, long known for top-tier rifle and pistol ammunition, offers the 5.56mm in various grains, all of which are super reliable. So when they sent me a few boxes of their 62 grain Barnes TSX, it didn’t take me long to pack up my AR and head to the range, ammo box in hand.

With both the trust reliability of the Black Hills name and decades of excellent ballistics from Barnes Bullets, I have to admit that my expectations for these new rounds were awful high. However, success seems to follow both of these brands everywhere they go and in every gun they are fired through, so I was more than a little excited to get started putting shots downrange.

Let’s start with the specs. The Black Hills 5.56mm 62 grain Barnes TSX features a monolithic machined copper projectile that immediately begins expansion upon impact, forming a temporary cavity larger than most conventional bullets form. Because the projectile is full copper, with no lead, it tends to retain its weight through the firing process, with scores as high as 99%. Not many, if any, other rounds can match that performance. This translates to better penetration, whether you are shooting wild game or stopping a human threat.

One of the biggest complaints about rifle rounds in general and specially the 5.56mm is their tendency to tumble inside the target. They penetrate fine but them turn around partway through, reducing their energy too fast. However, these Barnes TSX rounds are hollow point, so they do spread on impact, creating a wide wound cavity.

For my test, I loaded up my trusty 2A Armament BLR-16 and headed to my local range to send a few of these freedom seeds through some paper and into a rubbery grave. I loaded up a full 30-round magazine, slid the target out to 25 yards, and started hammering away, slowly at first to test the accuracy. After ten rounds, I brought the target home and was very pleased to see a tight grouping with about 4 inches from top to bottom, less side to side. My Vortex optic was zeroed at 25 yards, so holdover was never a factor.

After the target was railed back out to the 25 yards, I increased the fire rate to see how repeated quick shots affected recoil. Result: hardly at all. Despite the 1,239 Ft. Lbs. of energy and an exit velocity of 3,000 FPS on a 20-inch barrel (I was shooting a standard 16-inch on my AR, so they were a tad slower, but only a chronograph could tell the difference), these rounds did not recoil noticeably more than their softer shooting brethren at all. Had I not known what I was shooting, I might have mistaken them for a lighter load. They shot soft and were extremely manageable even under rapid fire.

All told, I put over 200 rounds down range with zero malfunctions, which is to be expected with Black Hills. Between their .38 Special HBWC, 9mm Honey Badger and hollow points, and two versions of their 5.56mm ammo, I have shot over 1,000 Black Hills rounds through various guns with absolutely zero failures, light strikes, or any other ammo malfunctions. Every round has shot clean and true.

Black Hills tends to be a bit pricier than other ammo companies, but as is the case with so many things in life, you get what you pay for.