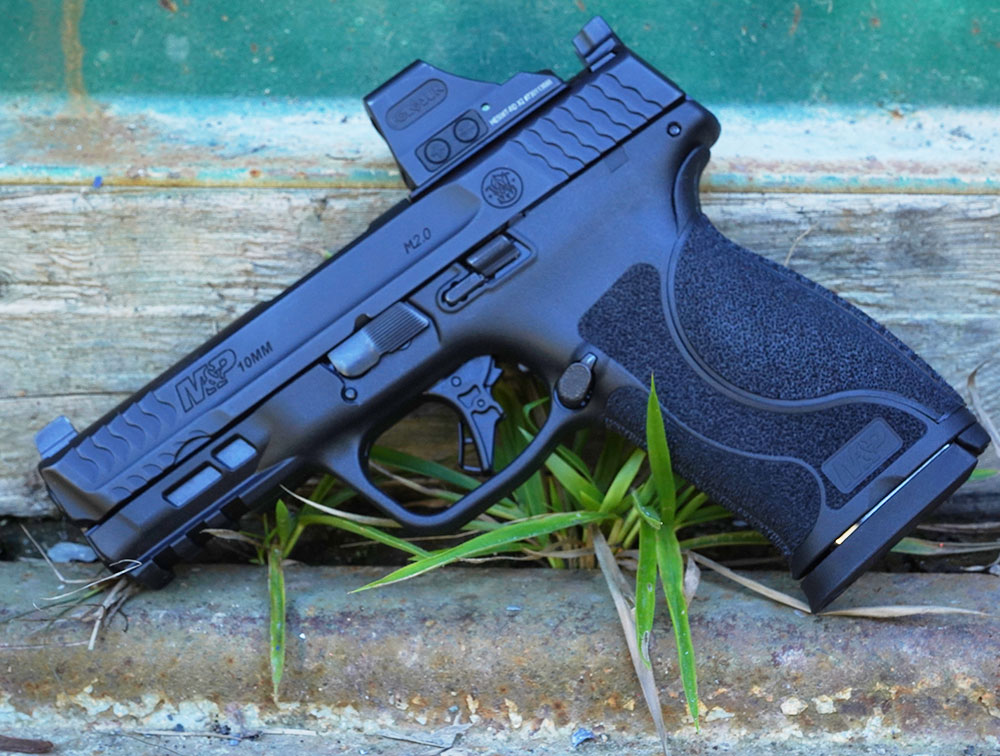 As we enter the height of the college football season, I look across the landscape, and a few conferences stand out above the rest. The Big 10 houses schools like Michigan, Ohio State, Purdue, and others. The Big 10 is characterized by power football, teams grinding it out on the gridiron and leaving it all on the field. Smith & Wesson channels its best Big 10 power move by introducing the M&P10mm M2.0. A firearm that oozes power and has all the aesthetics of being a big-time player in the 10mm world.

This compact 10mm pistol packs a punch that won't beat you up but protects you when needed most. A few weeks ago, I got a call about the gun and was initially surprised by the launch of a new 10mm by S&W. However, the further I went into today's landscape of weaponry, and it makes sense. We at Gun Talk constantly receive a message asking when companies will launch more 10mm firearms. Well, here it is. One from Smith & Wesson has the same feel but offers a couple new features.

Out of the Box

My initial thought immediately was…well, it feels just like an M2.0. There's no mistaking the grip and feel of a Smith & Wesson M2.0 grip. The texture bites down where you need recoil control the most. I've always appreciated that about the entire Smith & Wesson pistols. It seems that whoever developed the pistols understood recoil management as a high priority.

The M&P10mm comes with four backstraps, small, medium, medium-large, and large. I switched the equipped medium backstraps for the medium-large option. The 10mm pistol also comes with two 15-round magazines. That's a bunch of firepower lined up, ready to go.

Setting up the M&P10mm, I placed a Holosun 508T atop the pistol. The pistol is red-dot ready and has seven optic baseplates to fit a wide array of red dots. With suppressor-height sights, it's more like these are red-dot height sights since the pistol is not outfitted with a threaded barrel.

Okay, I understand I may have buried the lead but hear me out. I want to get all the familiars out of the way before I dive into the newly developed M&P M2.0 flat-face trigger. The trigger is noted as a flat-face trigger, but I find it has a slight curve. I busted out the Lyman trigger pull scale and had five crisp breaks that averaged 4 pounds, 12 ounces.

I’m a fan of the original M&P triggers, and the triggers that come standard on any Performance Center M&P M2.0 exceed performance. I’d say the new flat-face M2.0 trigger resides in between the two but closer to the Performance Center triggers. I got an average of 4 pounds, 2.8 ounces on the M&P PC C.O.R.E. trigger.

This gun oozes power. The 4.6-inch M&P10mm shot great and ran reliably. The recoil was strong but manageable. Being the world’s most average pistol shooter, I shot the gun quite well.
‍

The grip texture helped ease the movement and yaw during recovery. Smith & Wesson’s new trigger on the 10mm was surprisingly consistent with a quick reset. The larger safety show on the trigger provided a spot for the trigger finger to land with precision with each press.

Smith & Wesson hadn't had a 10mm since 1990, and it was time for them to trigger the power game. Welcome back, and keep going strong with the big 10 power. ~ KJ