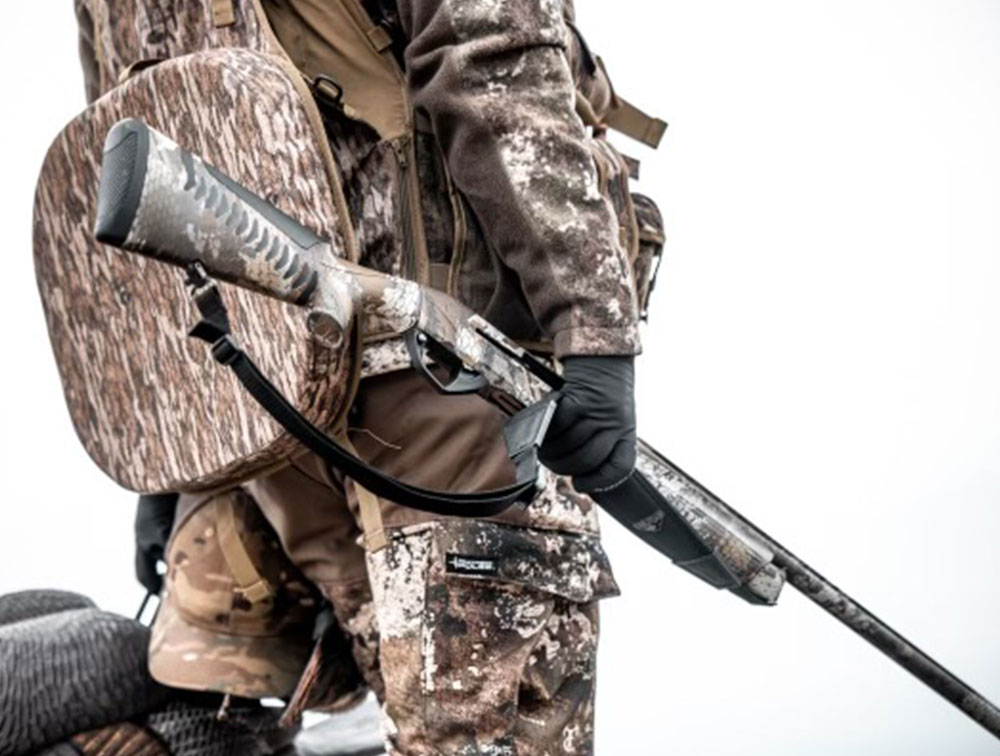 Over the past year, I enjoyed shooting the Benelli Super Black Eagle 3 shotgun in 12- and 20- gauge. My goal for the year was to use them across various shotgunning activities from recreation, sport & hunting. At the same time, I wanted to get a variety of hands-on them from novice and experienced shooters to give their assessment of the platform. The results were exactly what I anticipated – smiles & enjoyment across the board.

My first adventure was taking my 11-year-old son out spring turkey hunting here in MN. Both gauges were great – he carried the 20 and me the 12. Even though I had no plans to pull the trigger, it gave the appearance that we both were on the hunt. And as any parent who has taken their younger kids out hunting, it's always an adventure when you're in the field, and this was nothing short of that. This wasn't his first rodeo but his first behind the trigger. As always, we napped, called, and hid out, and yes, we had some turkeys working in just about the time a young doe decided to walk within arms reach of us and booger the entire setup. I'm not sure whose eye’s were wider, the doe's or my son's! The SBE3 performed as I had hoped. When we patterned the shotgun, my son never hesitated about shooting it. He's shot long guns before and, in his words – hardly even felt it go off. And in the field – it became second nature, and he never once complained about carrying it around the entire day. These guns are so well balanced, not just on the draw but even when you sling them over your shoulder for a walk in the woods.

My next outing was with an old friend for a couple rounds of sporting clays at the local club. He's an avid waterfowler whom I'm slowly converting over to more big game hunting…but I digress. We have boys separated by one year, and he was looking at what to get his son for his first "personal" shotgun. To be fair, he was already considering the Benelli as he has a couple himself already…all be it the original Super Black Eagle. He enjoyed them immensely and could tell the difference between the original to these 3's. And when we were done, we both shot better with the 12 but thoroughly enjoyed the 20. His comment was he would have no problem getting the 12 for his son now and letting him grow some into it. He and I are of the same thought that we don't want the recoil to turn kids off from enjoying the sports we love. And when you combine Benelli's Inertia System with today's ammo loads – recoil concern is no longer an issue.

For the third outing, I got back out for Minnesota's dove opener with my brother-in-law and his buddies. He, too, is more of a bird hunter (primarily ducks and pheasants) than I am, and I wanted to get his take on these as well. We started the day with a flurry of birds, he on his own gun, and me with the Benelli 12. Then we switched things up, and he took the 12 while I loaded up the 20ga. As soon as he held it, a smile came on his face as it was much lighter than he currently had. He was nervous about how it would kick, and I assured him not to worry and that he won't even notice it. Mind you, my brother-in-law is 140 and maybe 5'4”….so on the smaller side. After his first two birds with the gun, he looked at me, and his smile told me that I wasn't getting the gun back till the day was over.

Throughout all of these outings, the firearms performed flawlessly, and the typical response from everyone was – they shoot so smoothly and feel so comfortable in hand. While any shotgun can be used across all these outings, the SBE3 proved that you get what you pay for.  No matter your skill level.

Adequately taken care of, these shotguns will last and perform for any hunter for a long time. And yes, you waterfowl guides, we know that regular cleanings mean something different to you than us familiar Joe hunters.

Benelli is the originator of a quality inertia-driven shotgun that runs regardless of the elements. The inertia system Benelli has created is second to none – smooth, clean, and flawless operation. It reduces felt recoil drastically that even shooting traditional turkey loads isn't a cringe-worthy experience…. even for an 11-year-old. If I had to choose one to use for the rest of my hunting days – I'd take the 20ga. Each model comes with a full array of chokes, and I'd probably even add a couple more to the mix, but there really isn't anything I couldn't do with this shotgun. ?The shotgun feels well enough built that it will last long enough to pass along to my son and his son someday?

I like to feel balanced in a good 12-gauge shotgun. There's something to be said about a gun that swings easily and lifts naturally. Benelli elevated the standard for fit and finish on the SBE3 12-gauge shotguns. While I don't get out to the clay fields often enough, the fine-pointing shotgun burned through the clays for both novices and experienced clay busters.

Shotguns point differently for everyone. I can pick one up, and it points just fine, but other folks don't get the same experience. The SBE3 found the middle ground. It's such a well-crafted shotgun 90 percent of shooters could pick this gun up and run the lights out of it. The first few stands of clays warrant a little getting used to, so I was hitting clays at further distances. I was getting used to picking them up again, but I was busting clays from beyond my normal range.

I don't know what to attribute this to, but hitting far-ranging clays and birds was difficult. With the advancement of modern shotguns shells and shotguns, like the Benelli SBE3, shotgun enthusiasts can extend their ranges.

Overall, the 12-gauge SBE3 is what I expect from Benelli. I know how good the Super Black Eagle shotguns have run in the past, so it's great to see they made improvements on something so reliable. I'm sure that was quite the task.

Talk about a sweetheart of a shooter. The SBE3 in 20 gauge is light, nimble, versatile, and with today’s small gauge ammo increases the lethality out to extended ranges.

This one is phenomenal for young and new shooters. The inertia-driven system that Benelli incorporates makes it a dream to shoot.

It took a bit, but I'm upping my shotgun game with the SBE3. I've heard stories of how durable and manageable they are, but it's hard to explain until you've got one in your hands. Trust me, when you shoot it once, you’ll be hooked. ~ Matt

A 15-year firearms industry veteran, Matt Johnson chases big game with everything from archery equipment to muzzleloaders and everything in between. The Minnesota native has enjoyed 33 years of big game hunting and finds most of his success on public grounds. If you can’t find Matt on the slopes in the winter, he is on the hunt.