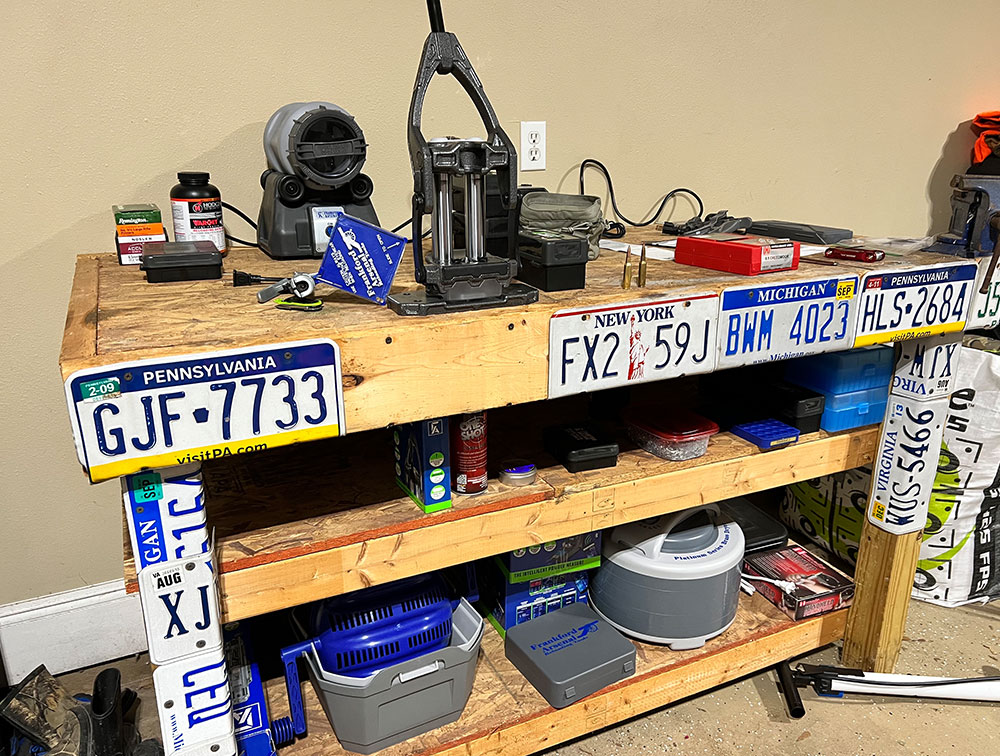 I'm an all-or-nothing kind of guy, and I want to be up and running with as little wait as possible if I am doing a project. But in the world of reloading...I have to wait...and it's as simple as that.

Some kids enjoyed the taste of glue and drinking through a high-pressure water hose. On the other hand, you had kids that sat and watched kids like me lip smack the glue bottle and inhale enough water to choke an elephant. I wish I was the second kid, but I am not. All or nothing, baby!

My reloading journey began about 4 months ago. I started out by searching for a reloading bench, which was found two doors down at a neighbor’s house. He was looking to offload a workbench, and I was there to swoop in for the recovery. It's ugly, but it's a start. Now that I think of it, that's the same thing my wife said about me when we started dating.

From there, I spent time collecting reloading equipment and components as they become available. The hard things to find were…and we all collectively say… PRIMERS. I found a few, but it is alarming how few places have them in stock.

PSA! I almost fell into a scam. I found primers by Googling “Primers in Stock.” It took me to a somewhat shady website with large primers in stock. They were selling them for $100/1000 ct. I thought I'd found the motherload until they asked me to either pay via Apple pay or Venmo. Both are payment options you should be leery of. I reached out to the company and was quickly greeted by a text and Venmo account name. The ol’ spidey senses were ringing loudly when I looked out into the landscape, and nobody except this place had primers. Beware, folks. Just because the internet says they have primers doesn't make it so. Stick to reputable websites like Brownells, Midway USA, and others to do your buying.

I also waited patiently for Hornady Match Grade reloading dies, Frankford Arsenal M1 Press, and Frankford Arsenal Intellidropper. I continue to wait, ever so patiently, for the Frankford Arsenal Aluminum Powder Funnel. I’m four months into the reloading game and am waiting for the last few pieces of the puzzle. So, what do I do in the meantime? I research. I learn. However, there’s a ton of information out there. Just like drinking through the water hose, I've got my hand on the spigot, and she's opened up.

I have at my disposal two of the finest reloaders: Tom Gresham and Jarrod “Box” Grove. Plus, I have an astonishing number of YouTube folks who are inching me closer to better understanding the process. I slowly realize that too much information from too many sources floods my brain and confuses the life out of me.

It started out simple enough. Use the search function on YouTube and type in Reloading 6.5CM ammo. You’ll receive unlimited access on how to best reload 6.5CM ammo. That. Is. A. Problem. I had to trim the voices. It took rounds and rounds of searches and clickbait to tell me I needed something, someone consistent. So, I am using three voices now, two experts and a beginner, like me. Here they are and why I use them.

Find someone that is utilizing the same products that you are. Box is a seasoned reloader and all-around excellent human being. I met Box at a media event at American Outdoor Brands. Box works with the line of products at Frankford Arsenal, so he understands the products I use. He also knows more about reloading than I ever will, and he designed much of the gear that I use. His reloading room is more significant than most home theaters and is impressive. It’s nice to reach out to the person who designed the product and uses the same tools.

There are a bunch of folks out there that give unparalleled advice, but I choose to listen to Gavin. Gavin Toobe or Ultimate Reloader is my voice of choice on the interwebs. He’s a great teacher and communicator. He teaches multiple ways to skin the proverbial cat, and his style is concise. Plus, he doesn’t solely dissolve himself into one reloading company. He’s familiar with the reloading world and utilizes his reach to benefit all reloaders, especially the new folks.

Walkthrough difficult times with someone that is as new to reloading as yourself. Many of you know Luke because he appeared on an episode of First Person Defender. Luke's journey to reloading is much like my own. He began collecting components and set his sights on cranking out his own freedom seeds. He's reloading 9mm and 5.56 ammo while I'm on the precision path. I find it very calming to know that I am not in this alone. The wait and struggle are real. Luke and I spend hours texting each other, holding each other accountable, and finding out how everything is going. This is a huge help, even if neither of you is an expert. He’ll be the first to tell you waiting to become a reloader is the hardest part.

Those are my three voices. Any more than that, and I begin to feel the squeeze of too much information. I have to kink that hose at some point, or the flow of information is just too great.

It's a complex process to begin, but I am happy I'm struggling with others out there. I only wish I would have taken up reloading much earlier. You know, when you could find primers and powder. Happy reloading. ~ KJ