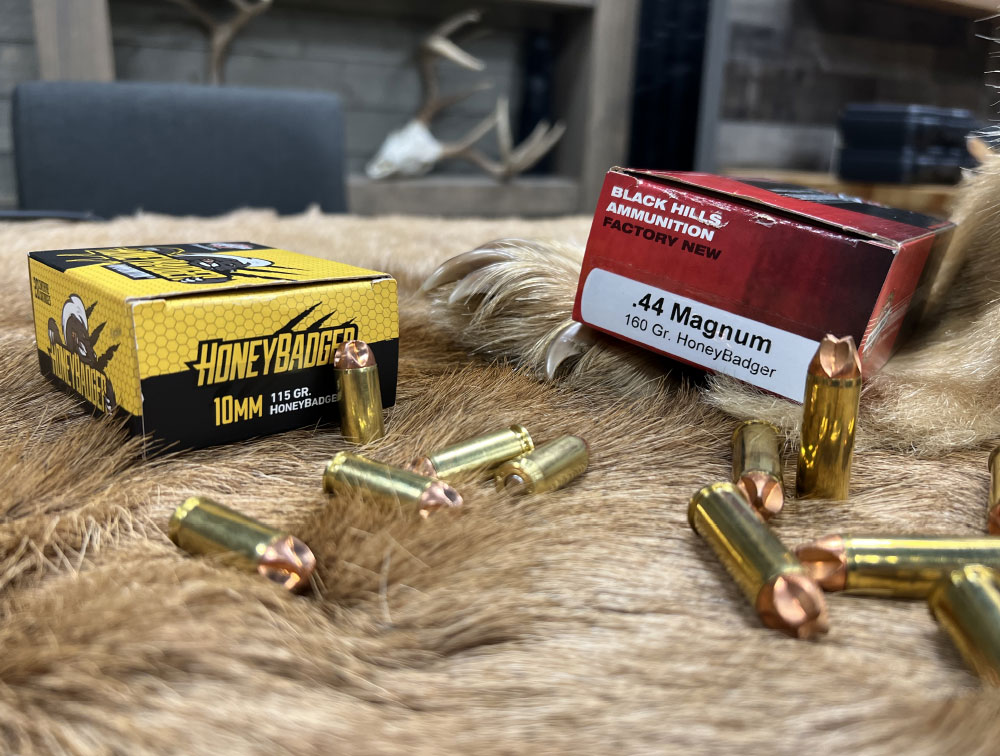 In recent years, new ammo seems to be busting at the seams. But one caliber holds the podium for the highest demand when it comes to backcountry defense – the 10mm.

If you know Black Hills Ammo, you understand how popular their HoneyBadger ammo has become since its launch. They offer HoneyBadger in 380, .38 Special, 357 Magnum, .40 S&W, .44 Special, .44 Magnum, .45 ACP, .45-70, and 9mm. Black Hills had a huge hole in their selection with all the offerings. It was a big hole about the size of a massive tank grizzly. I've asked Black Hills multiple times about the chance of a 10mm being offered and was met with a reluctant, perhaps.

All Black Hills HoneyBadger performs unbelievably, but I’d love to be able to shoot something built for bear other than the .44 magnum. You see, I don’t own a .44 Magnum, but I do own a 10mm.

I, like many folks, utilize a 10mm for bear protection in the backcountry. We all begged Black Hills for a 10mm HoneyBadger round, and they listened. They delivered a bear of a round with the 115gr. HoneyBadger.

I’m not wheel-gun adverse, but if I had to choose to carry six rounds of .44 Mag OR 16-rounds of 10mm, what am I shooting? I think we all collectively shouted 16 ROUNDS! Let’s check out why that makes a difference.

Grizzlies travel at a whopping max speed of 35 mph. Here’s some perspective. Usain Bolt is the fastest human alive. We've all seen his highlights and agree that the dude bakes on the track. He was clocked doing 27.78 mph at the 2009 World Championships in Berlin. That's fast enough to get a speeding ticket in a school zone! Grizzlies are quicker and much meaner than Usain Bolt.

Let's be honest. If I've got 800-pounds of hate barreling down on me at 35 mph, do I trust my skills not to drop multiple rounds? Looking at my shooting, I can promise to drop a couple rounds. The odds are in my favor if I have more of them, right?

By now, you are screaming; just practice with the wheel gun to improve your effectiveness. You are correct, and a shot timer would help mimic panic and enhance speed. However, you don't get rounds back in an attack and only wish you had more.

The other disadvantage to running a revolver, to those who don't have the last name Miculek, is speed. Shooting a revolver fast isn't my strong suit, and I'm willing to bet it isn't yours, either. I run a semi-auto pistol better and, in a stressed-induced state, trust my skills more with a pistol than a revolver.

If we look at the numbers, the .44 Mag steals the show. The .44 Mag HoneyBadger has a muzzle velocity of 1700 fps and 1027 Ft. Lbs. of energy. Those numbers would even turn the head of Elmer Keith. The problem with the numbers is that you feel that speed and energy are much less pleasant to shoot than the 10mm.

Don't hold your breath, hoping the 10mm numbers took a huge jump. Black Hills developed the 10mm HoneyBadger to be easy to shoot with downrange effectiveness. Packing 1600 fps at the muzzle and 564 Ft. Lbs. of energy, the 10mm needs plenty of back-ups to match the punch of the .44 Mag.

That’s what we are taking from this brief glimpse into the two backcountry backers from Black Hills. If you want to pursue punch, go with the .44 Mag. But if you need plenty of backups like me, I'm rolling with the 10mm HoneyBadger. ~ KJ

Kevin Jarnagin (KJ) hails from Oklahoma but quickly established Louisiana roots after joining the Gun Talk team. KJ grew up as a big game hunter and often finds himself in a different venture. His early career had him working with one of the finest PR agencies in the outdoor industry – Blue Heron Communications. Before that, KJ molded the minds of business school students at the University of Oklahoma. Quickly learning he had to grow up sometime, KJ dedicated himself to the outdoors no matter what it took.

Sporting his flat-brimmed cap, KJ traverses the country in pursuit of the greatest game and best adventures. Whether making his way to British Columbia for elk or training with pistols, KJ always seems to find a gun in his hands and adventure on his mind. KJ is a skilled communicator and connector in an industry he has loved since childhood.