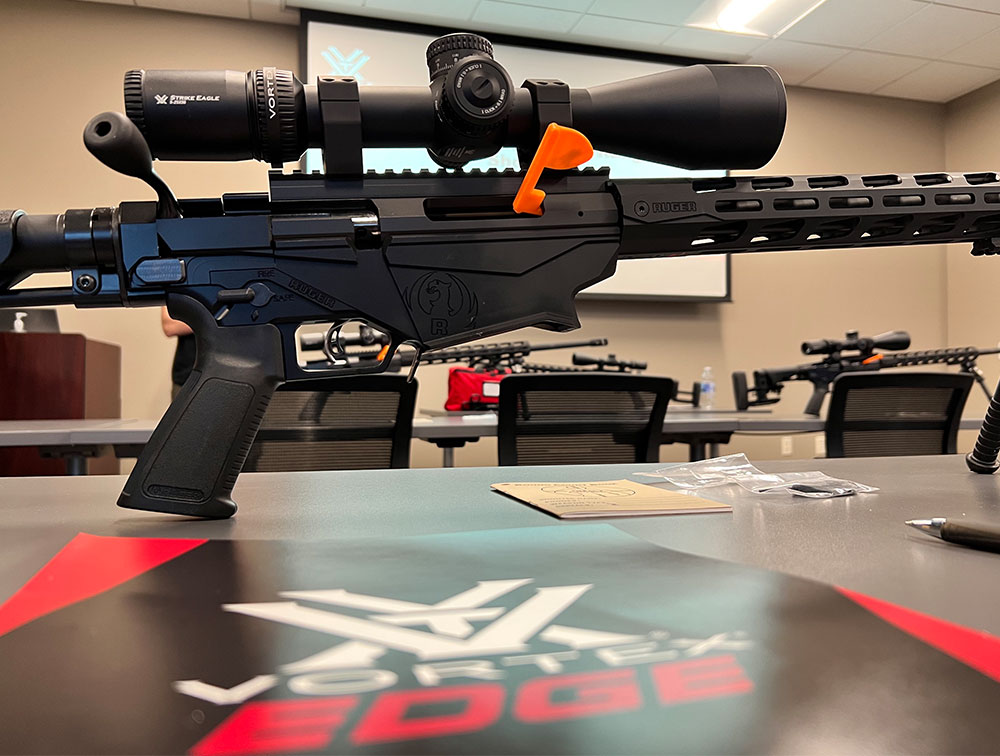 We walked through the double doors in Barneveld, Wisconsin, with open minds. The Gun Talk crew arrived ready to tour the Vortex complex. Our mission was to take the Intro to Long Range Shooting course provided by Vortex Edge, the training arm to Vortex Optics. Now, I know many of you believe that introductory classes lend themselves to novices, but I found out that even an old dog can learn new tricks.

At One Vortex Drive, you find a beautifully constructed building with an open floorplan. You enter a home once you cross the threshold from concrete to hardwood floors. The showroom floor at the entrance houses every Vortex product made, and directly behind that.

Employees of Vortex diligently worked away with pups underfoot. Yes, Vortex allows its employees to bring their dogs to work. The feel I received when I strolled through was openness. The entire vibe of the company was one of genuine openness to the inner workings of Vortex. It didn't matter if you came off the street or arrived for business.

The facility butts up next to some state-owned property so visitors can snag a pair of binos and test them outside and in the elements they were designed for. I appreciate an organization that allows folks to walk in and test out products firsthand. If you have a question about the glass or inner workings of a pair of Razor HD binos, someone is on hand to answer those questions. The entire purchasing process at the Vortex shop is simple, which helps a guy like me because I can make the simplest tasks difficult.

Once the tour ended, it was time to prepare for class. The Introduction to Long Range Shooting is held after work hours from 5:00 to 9:00, conducive for those with busy schedules. Plus, if you aren't sure where to begin or don't have the means to provide everything, Vortex includes firearms, optics, and ammo. It's everything you need included in the course. You just show up.

Vortex Edge houses six full-time instructors that are well versed in multiple disciplines. Instructors are chosen not only on merit but their ability to communicate to a broad spectrum of students. Our class had an array of students that included beginner and experienced shooters. So, who needs to take this course?

This course intends to educate and begin building a solid foundation for long-range, precision marksmanship. Simply put, this course is for everyone with interest in long-range shooting.

I’ve done a fair amount of distance shooting and understand that I don't know the finite details involved. However, reviewing the basics never hurt anyone, especially receiving a little information from great instructors.

Our class featured numerous new shooters, which is encouraging to see. One observation the Gun Talk team noticed was the number of questions thrown out to the instructors. The questions ranged from very basic to highly technical. Now, mind you, the type of guys asking the questions came from accountants and engineers.

Each instructor diligently answered the questions, but what wasn't lost during the Intro to Long Range course was the ability to communicate and be open. With every question, light bulbs flickered on, and students began turning the page from beginner to intermediate shooters in a short time.

I was encouraged to see how new shooters absorbed the information, and they devoured it. It was amazing to see how simple questions that I take for granted seemed mind-blowing to the new shooters in the class.

During the course, I only fired nine rounds. That seems dang light, but remember, this course covers fundamentals and sighting in the rifle. We used the Ruger RPR chambered in 6.5 Creedmoor. Mounted on the gun was the Vortex Strike Eagle 5-25X56 scope.

It is important to note that this five-hour course isn't all shooting. The Edge Trainers begin with class sessions, then to scope-mounting, and completed on the range with sighting in the rifle. It is essential, but no stone is left unturned. Instructors teach the fundamentals of shooting, all while doing it safely.

I don't think I can accurately express the need for all shooters to take an introductory course. There's a need to perfect one's craft, even if that means revisiting the fundamentals. If you can open your mind and enter with a willingness to accept that you can learn in any environment, the Vortex Edge experience is for you. ~ KJ