7 Reasons The 10mm Is the Best Pistol Caliber 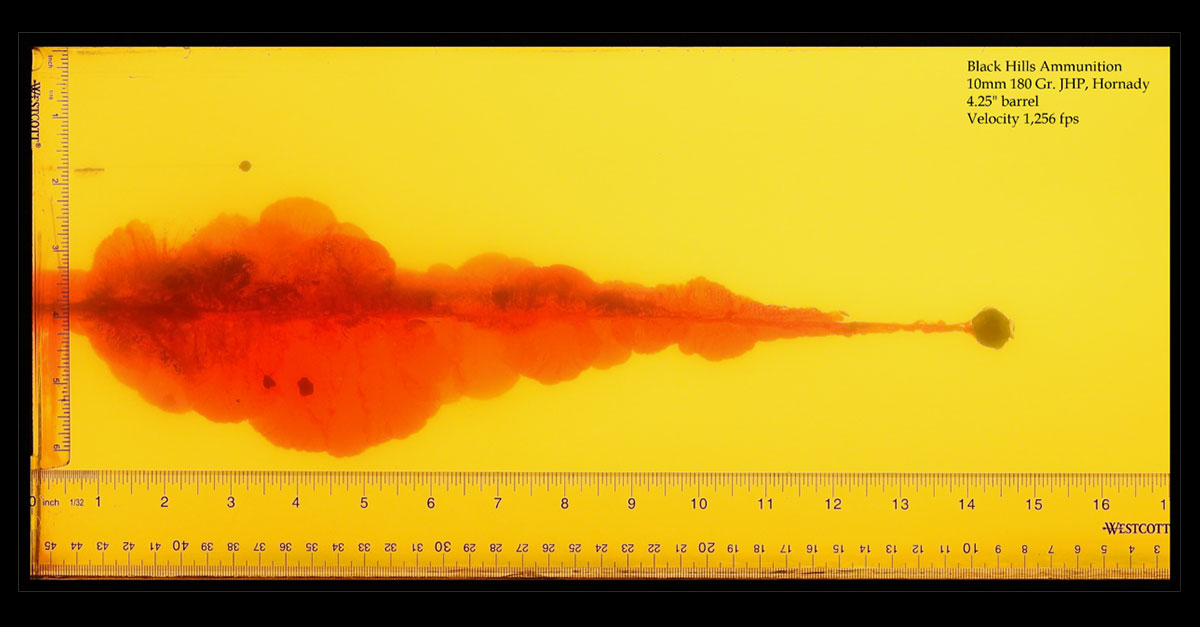 It's my contention that the 10mm auto cartridge is the best personal protection round available.   Yep.  I'm staking out that ground, and I'm here to defend it. What makes the 10mm my choice? In a word, performance.

You may know that we have offered three special pistols as Gun Talk guns over the year. All have been 10mm autos. The latest is the GT25, which has been in the works for at least two years. It was delayed a year by production shutdowns due to the pandemic, but now it's here, and it most definitely is worth the wait.

You can see the full specs on the pistol at HERE. (The gun actually looks even better in person than it does in the photos.) Here's the short version. It's a Ruger SR1911, but it's a Commander size (4.25 inch barrel with a full-size grip), made in the Ruger Custom Shop, using upgraded after-market parts that I specified. The details are on the website.

Multiple range reports are coming in now, and everyone comments on how this design somehow tames the recoil to a very comfortable level. It's spooky accurate, and the trigger pull is divine.

That's the pistol.  So why do I think the 10mm is the best cartridge for personal protection in a handgun?

The 10mm Auto cartridge simply has more power than the more popular choices in carry guns. Is that important?  Col. Jeff Cooper thought so when he came up with the concept for the 10, as did Jim Cirillo, of the famed NYPD Stakeout Squad, who determined what he thought was the best handgun load for gunfighting. It turned out to be pretty much identical to our modern 10mm loads.

All handgun cartridges are compromises. If you had the choice you'd use a rifle, but a handgun is so much better to carry. Still, more power is always good, as long as the pistol is controllable for follow-up shots.

The Black Hills load pushes a 180-grain Hornady XTP bullet at 1290 feet per second (fps) from a five-inch test pressure barrel. Velocity from the 4.25-inch GT25 averaged 1233 fps at 12 feet (not corrected to the muzzle), which generates 608 Ft. Lbs. of energy.

This is the big payoff. From the major ammo makers to boutique outfits, everyone is loading the 10mm these days. Smart shooters understand the value in picking different loads for different needs. For instance, Black Hills tested its 10mm load out of a GT25 into ballistic gel. The temporary wound cavity was massive, the bullet weighed 152.8 grains when recovered, for an 82 percent weight retention. It measured .610, for a 52 percent increase in diameter. That's a great load for defense against human attackers as well as for hunting deer-sized animals or hogs.

I'm hoping Black Hills brings out the 10mm in its Honey Badger line so we can see what those unique bullets will do.

When I'm walking the woods though, and my thoughts are about bear protection, I want a different load. Several companies, such as Federal and Buffalo Bore, load heavier bullets designed to not expand, but to penetrate deeply while doing maximum damage. That's what I carry when afield.

I keep different magazines loaded with different loads and just switch out what I'm carrying based on the most likely threat.

It's certainly possible to have a more powerful handgun, but you will likely have to go to a bigger gun. I went with slim grip panels of G10 material on the latest Gun Talk pistol, and it makes a big difference, along with the undercut behind the trigger guard. The gun just feels smaller than it is. In a medium-size pistol the 10mm cartridge is about as powerful as you can get if you are staying with mainstream options.

Several companies offer six-inch barrel versions, and if I were getting a 10mm for just hunting, I'd probably go that way. There are even compact and sub-compact versions for those who need deeper concealment.

Along with power and the size of the pistol, we have to consider ...

No doubt I'm a fan of "more is better" when it comes to capacity. I do think, though, that the 10mm hits a sweet spot of compromise.  In a single stack (1911, for instance) you can have eight or nine rounds in the magazine, plus one in the chamber.  I figure that 10 rounds of 10mm in the pistol plus eight or nine rounds in a mag pouch would be enough for 99.99999 percent of encounters.

5.  It's Perfect For Defense

Yes, this is a culmination of the other points. It just happened that after we announced the release of the GT25 I unearthed an old copy of Jim Cirillo's book "Guns, Bullets and Gunfights: Lessons and Tales From A Modern-Day Gunfighter." It's still available on Amazon, and it should be in the library of anyone who is serious about self-defense with a handgun. Cirillo was mostly a revolver guy, and in his experiments with different guns, barrels, cartridges and bullets, he came away thinking that the perfect combination was a 175-grain bullet at 1250 fps. He did that with a slightly downloaded .41 Magnum, but as you can see, it's pretty much the 10mm Auto. He also did some work with the 10mm and liked it.

For anyone willing to practice, the 10mm is quite controllable while packing a punch which is most likely to stop an attacker quickly. That's about as good as it gets.

For a long time the small cult of 10mm followers felt like they were wandering in the desert, crying the virtues of their favorite load, and begging gun makers to chamber this great round. They were mocked as followers of Col. Cooper, or even of being fan boys of Miami Vice (where the 10mm made a splash).

Finally gun and ammo makers have recognized the advantages of this round, or at least they acknowledge that there are more than just a few of us who will actually buy 10s in a variety of configurations -- even revolvers such as the S&W M610.

And ammo!  This year is seems that everyone is loading 10mm. Of course, you still have to find it, but through judicious web searches you can find some.

The last point I make may not be measurable, but there's no doubt that the 10mm delivers a High Coefficient Of Cool. HCOC. Chances are your buddies don't have one.  That might be reason enough to get one. Everyone you know will want to shoot yours, which may make you the center of attention, but it also can eat up your ammo supply, so be forewarned.

Let me finish with a thought. If you are going to get a 10mm pistol, you might as well get one that is excellent, that is beautiful, and that is still designed to be a working gun you can bet your life on. The GT25 will be limited to only 500. The "if you snooze, you lose" maxim applies here.

Yes, I'm a proud Papa, having worked on this one for a long time, but it really is that good.