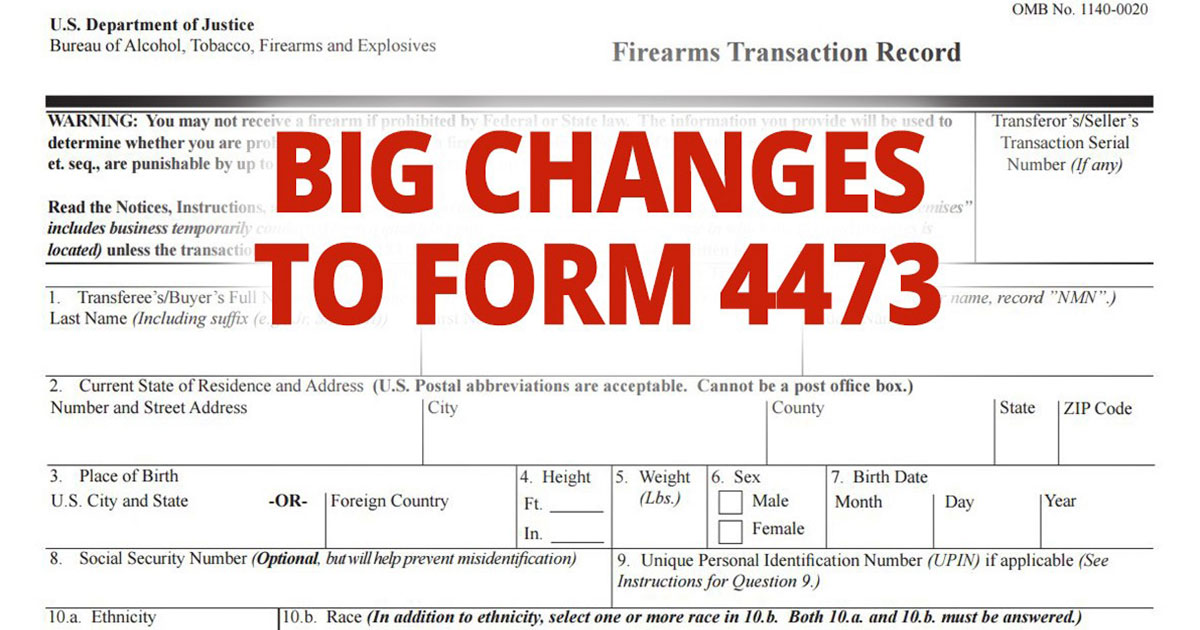 If you have not viewed the new federal form 4473 to buy a firearm, take a look now as there are changes. Here is an important link.

The ATF Form 4473, first required in 1968, is the form a buyer must fill out when transferring a firearm through a federal firearms licensee (FFL). The ATF has now updated the form to reflect changes caused by Final Rule 2021R-05F, which changed the definition of a firearm and the new gun control laws passed by Congress. The new forms will be available through the ATF Distribution Center beginning February 1, 2023.

To be quite honest, the last time I bought a firearm from a FFL dealer and filled out a 4473 was 20 years ago. I then firmly believed, as the federal government promised, my purchase information would not be shared beyond the dealer.

I sure do not believe that now with BATFE agents reportedly visiting firearms dealers and photographing all purchase records to build a database. This brings up the subject of trusting the government to safeguard your information and interests. Stay informed.

Therefore, I have not bought any firearm from a dealer, and I’m making do with firearms I already have or can buy private treaty (while we still can).

But look at the buying surge in Oregon after the voter-approved (by a tiny margin) Proposition 114 passed on Nov. 8 to severely regulate firearms and magazines.  The data shows “1-month change in background checks Oct 2022-Nov 2022: +162.9%.” These buyers had to complete a 4473 to “register” their firearms purchase and owners will be in searchable database.

Oregon’s new law also prohibited the manufacture, importation, possession, use, purchase, sale, or otherwise transferring of ammunition magazines capable of holding more than 10 rounds. It made violations a class A misdemeanor, which is punishable by up to 364 days in jail, a fine of up to $6,250, or both.

Many pro-gun folks say that “registration leads to confiscation” and most likely that is the goal. History has proven this. With all the current anti-gun legislation and rhetoric, how could any rational person think otherwise?

A friend asked my advice on buying a semiauto 12-gauge shotgun. I gave my recommendations and he found one in Oklahoma and bought it new on private treaty and paid a premium. He was willing to do so to avoid the “registration” with a government-mandated 4473. His thinking mirrors mine.

The 4473 specifies the firearm’s owner, address, specific firearms info and more.  How is sharing this information with a federal agency a Second-Amendment right? It’s a federal law. And where does that sharing information stop? You can figure that outcome.

And further, if you trust state governments, consider that: An independent investigation into the release of names, addresses, and license types of every CCW holder in California earlier this year established that approximately 192,000 individuals had their information made public, according to the California Department of Justice.

This supposedly was an “unintentional” release of information. Want to put money on that with California’s and today’s antigun climate?

International statistics report that ”There are more than 393 million civilian-owned firearms in the United States, or enough for every man, woman and child to own one and still have 67 million guns left over.” By comparison, the U.S. military holds about 4.5 million guns, and state and local police have just over 1 million.

Sure will be interesting when or if the feds try to come and confiscate them from civilians.

And in Rhode Island, under a recently passed law, owners of high-capacity magazines (more than 10 rounds) had 180 days to modify the banned components, surrender them to police or transfer them to people in states where such magazines are legal. New Jersey just passed new legislation to limit civilian firearms even more

Anyone still in possession of an outlawed magazine after the grace period could face up to five years in prison or a fine of up to $5,000. I would bet compliance will be interesting.

The debate on “public safety” and firearms will be endless, and yes we do need to consider public safety with firearms. So-called “red-flag laws” seem to be a popular topic, and tend to be in vogue to promote the “we did something” stance by antigunners. However, inn practice, how effective are such laws?

Nineteen states have such laws, but in recent shootings in Colorado Springs and Virginia, did those laws stop the shooter? As with any law or regulation, enforcement and followup are keys. Passing laws is easy, but filling the gaps and enforcement is the hard part. The same story exists with firearms laws.

Constitutional carry and abuse of firearms gets a lot of press. So far, 25 states have Constitutional carry (permitless) laws in some form. And the U.S. Supreme Court in Bruen vs. New York helps assure that right, while allowing some state-based regulation.

In that decision, the court in a 6–3 decision, ruled that New York's law gun laws was unconstitutional, and ruled that the ability to carry a firearm in public was a constitutional right under the Second Amendment.

The majority ruled that states are allowed to enforce "shall-issue" permitting, where applicants for concealed carry permits must satisfy certain objective criteria. This may include passing a background check, but that "may-issue" systems that utilize "arbitrary" evaluations of “need” made by local authorities are unconstitutional.

We’ve already seen, after that decision, how states such as New York, New Jersey and Maryland are instituting new mandates to circumvent that ruling. More to come on all this. Oregon’s Proposition 114 is a voter-approved firearms and magazine-capacity initiative that faces multiple legal challenges.

As Gun Talk readers know, follow federal, state and local legislation on firearms. If you do not like what you see, complain through legal and governmental channels. However, even those options become more limited now.

Staying on top of changes is key to help us Stay safe, be prepared. ~ Mike