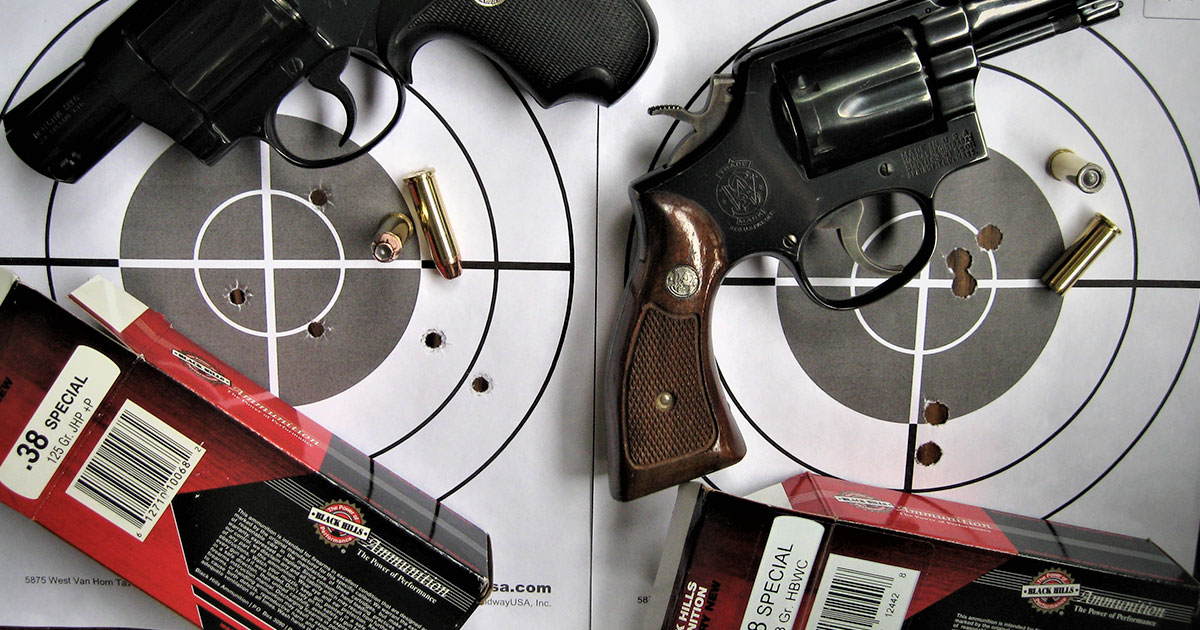 After testing Black Hills ammunition in two .380 and two .45 ACP pistols for Gun Talk in May and June, I returned to the range to run two Black Hills New Pistol Ammunition .38 Special loadings in three revolvers.

I had a favorable experience with the .380 and .45 rounds and welcomed the opportunity to take a look at the .38 Special rounds. I expected to be satisfied with performance, and I was.

The 30-year-old company’s production facility is in Rapid City, SD, and offers rifle and handgun ammo in a variety of loadings. Owners Jeff and Kristi Hoffman have a small staff, but quality dominates. The website notes that "every round of ammunition leaving the factory is hand inspected by our quality control staff.”

All have no rear sight and only a groove, with a fixed blade front sight.

I set up targets at 21 feet at the nearly new H.I.S.S. L.E. Indoor Range, a six-lane setup. I ran two 158-grain round nose loadings through each revolver for starters. I then moved to the 148-grain.

Years ago when I began reloading for .38 Special, I bought a box of 500 of the 148-grain hollow-base wadcutter bullets, seating them on top of 2.5 grains of Bullseye powder. I even had tried reversing the bullet with the cavity forward as an experiment, but accuracy fell off quickly. Shooting this Black Hills round was a return to nostalgia.

My 640 is a J-frame .357 Magnum carrying only five rounds, so I used that magic number for each revolver for the testing. Four of the 148-grain bullets patterned at 1 3/4 inches in the 640 with a standing two-hand hold.  The Model 10 produced a three-round grouping of ½ inch, showing the benefits of a heavier revolver and longer barrel. My Colt spread wider, but did produce a nice two-shot group of 1 inch.

With the 125-grain hollowpoint, the Model 10 gave a four-shot group of 1 ¾ inch.  My Colt rounds opened up with four shot group within 2 ½ inches. With the 640, the best I could do was three rounds at 1 ¾ inches. I usually figure on at least one flyer shooting offhand and my aging eyes do not help.

The 148-grain wadcutters have minimal recoil, but do produce a fair amount of visible smoke. That’s what I found as well when loading them at home. Shooting the 148-grain HBWCs is pleasant and easy on the hand.

The 125-grain rounds do have a definite hike in recoil and noise level with the lighter bullet and higher velocity. On the Black Hills .38 Special webpage, there is a graphic showing performance and penetration in ballistic gel, so take a look at that.  I would not hesitate to carry the hollowpoint loading as a defensive round in my .38s.

When I received the ammo from Black Hills in April this year, the retail pricing on the 148-grain HBWC was about $34.00 per 50 rounds. Pricing on the 125-grain JHP was $45.00 per 50, but bet these prices are higher now. Nationally .38 Special ammo, among other calibers, is in short supply as the range owner told me.

Years ago, I put Crimson Trace grips on my 640, so as I closed out my range time, I shot five rounds of the HBWC from a supported position for a test with the laser. The grouping was just under 1 ¼ inch with three shots touching. Sure shows the benefits of a laser sight and the grip fits my hand well too.

After evaluating six loadings of Black Hills ammo in three calibers, I appreciate the company’s quality, sturdy packaging and performance.

After my latest range visit, I am further convinced Black Hills has ammo to help us Stay safe, be prepared. ~ Mike